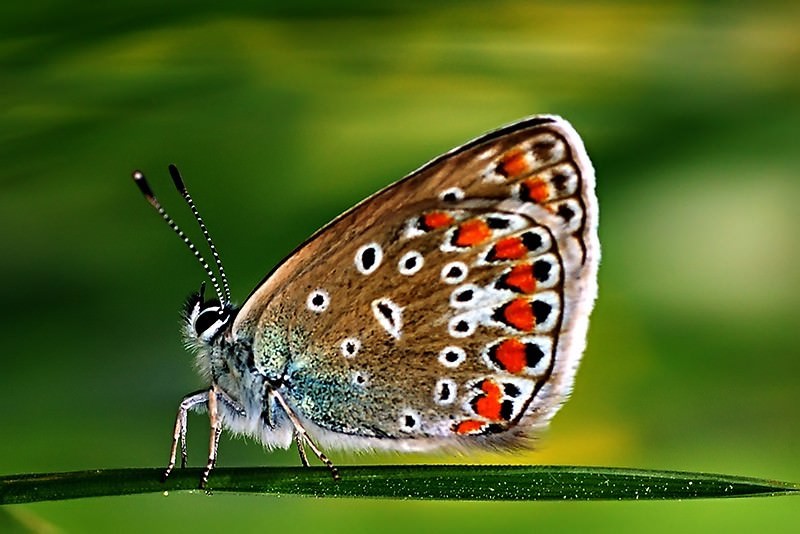 by Daily Sabah Aug 06, 2015 12:00 am
The Apollo, a butterfly from the Papilionidae family that has lived on Uludağ for the last 150 million years, is facing extinction. The rare butterflies can be seen near the summit of Uludağ in the summer. The biggest butterfly species in Turkey, the Apollo will now have to rely on the authorities for its continued existence.

The Apollo species, which has been the subject of many novels and plays, is from the Aras Valley and the lands of Karçukuru near Uludağ. Standing out with its red spots on white wings, the butterfly is a rare natural beauty.

Photographic artist Orhan Turhan camped in the Soğukpınar region near Uludağ in order to shed light on the secret mountain beauties. The photos of the Apollo that were taken by Turhan once again show the rare beauty of the butterfly. "Although there are around 170,000 different butterfly species around the world, each has its own beauty. There are so many butterflies in the world that there are almost one million butterflies per person," said the photographer. The Apollo, whose wings are 12 centimeters in length has been living on the summit and the foothills of Uludağ for 150 million years. Turhan said that Uludağ is a present for the local people of Bursa in terms of plant and animal diversity and continued, "Those who are aware of the value of this natural beauty get to the summit of the mountain in no time. The lifespan of the Apollo is short, like every other butterfly species. However, this rare creature will be extinct soon if it is not taken under protection. It is a matter of necessity to take this butterfly under protection, as they are exposed to global climate change and acid rain."

Also known as Mountain Apollo, this butterfly species lives in mountains higher than 1,000 meters. The number of Apollo butterflies has declined due to bug collectors and global warming. The Apollos mostly come from Poland. However, their number has also dropped in the Czech Republic, Sweden and Finland. The large-winged Apollos of Uludağ complete their development in 360 days. It flies for five days and lays around 100 eggs on plants named sedums. The Apollo lay eggs equally on every plant in order to create enough for its offspring to feed and reproduce.
RELATED TOPICS