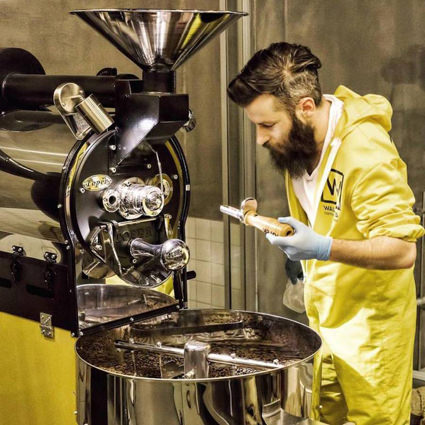 by Daily Sabah Aug 17, 2015 12:00 am
It has been two years since the final season of the Emmy winning TV series "Breaking Bad," yet entrepreneur Deniz Koşan, a Walter White fan, keeps it alive at his unique cafe "Walter's Coffee Roastery" in Istanbul's Caferağa neighborhood. In its fifth month, the cafe named after the series' protagonist, Walter White, a teacher-turned-king pin, has reached out to an international clientele.

Described as the "world's first coffee super lab" by Koşan, Walter's Coffee Roastery was established after a crowd funding campaign on Kickstarter. Customers see the cafe's staff in yellow jumpsuits looking like those used by White and deuterogamist Jesse Pinkman. And, of course their gasmasks are the next touch. Koşan told BuzzFeed News that he previously planned to open the shop in Brooklyn, but when his investor backed out so he decided to open the shop in Istanbul instead.

Upon entering the cafe, it brings to mind a meth lab because everything including roasting equipment, espresso cups, pancakes with Walter's face and Blue-sky decorated cupcakes promise an exciting experience. The staff brew coffee in their yellow jumpsuits in a scientific-looking machine and water is boiled with Bunsen burners.
RELATED TOPICS