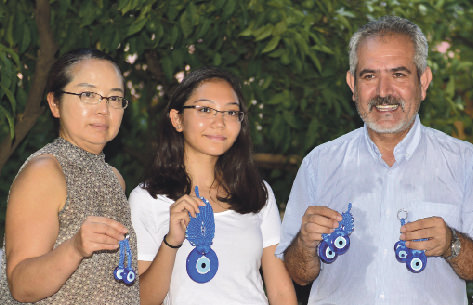 by Aug 17, 2015 12:00 am
Ali Kocaman, 56, opened two luxury boutique hotels in Antalya and Istanbul after he earned millions of dollars by selling over 10 million traditional evil eye talismans in Japan in over 10 years. Kocaman met a Japanese tourist in Sultanahmet Square in 1982 and then decided to settle in Japan when he traveled there to visit his friend after three months.

Living in Japan from 1983 to 2000, Kocaman went to Tokyo even before receiving confirmation from his friend. He said his friend gladly hosted him. "In those years, many people wanted to go abroad. Most of them preferred to go to European countries. I had a Japanese friend and decided to go there. I worked in a pastry factory for a while," he said.

Kocaman said that the Japanese economy was very strong at that time and that language courses were given to migrant workers for social adaptation. He met new people at the language course and developed his skills while working. Kocaman later met a shopping center owner named Amina who helped him open a small shop where he could sell traditional Turkish souvenirs. Using the name the Ali Baba Express Company, he began to import products. On his flight back to Turkey, he met a Japanese woman, Mitsuyo Kimura, whom he married. He now has two children – Amina and Nina. Kocaman began to sell copper boilers, old carpets, buckets and oil-lamps, which are commonly used in villages and do not have much cultural value. He said that copper boilers and buckets attracted great interest, as they were used in famous Japanese flower art.

Kocaman also said that he imported Turkish rakı and beer; yet the blue evil eye talisman drew the most attention in Japan. He told his customers that a talisman is generally hung on a door to protect people from misfortune and curses. With his earnings, he bought a historical building in Antalya six years ago and began to operate it as boutique hotel under the name Villa Verde. Kocaman also opened a hotel, the Sakura, in Istanbul.
Last Update: Aug 17, 2015 1:32 am
RELATED TOPICS