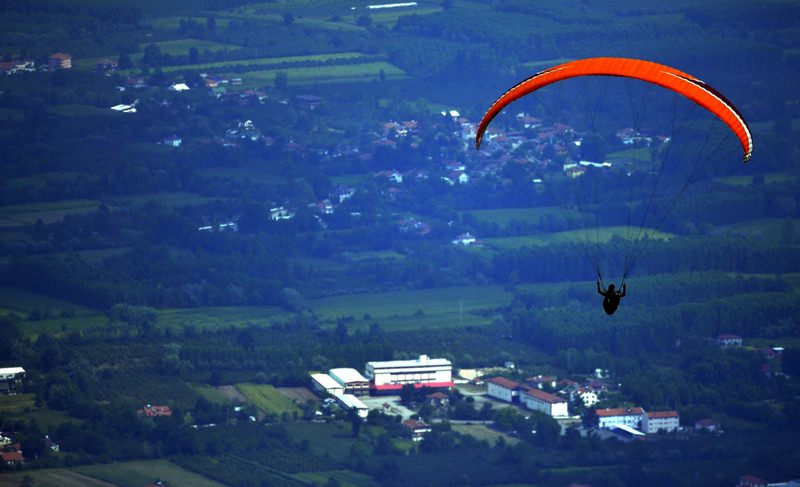 by Zeynel Yaman Aug 18, 2015 12:00 am
The inaugural Aviation Festival held in Düzce's Gölyaka district offered a stunning experience with sportspeople gathering at Bakacak Hill, which is 970 meters high, presenting breathtaking performances to those lucky enough to attend. The event was co-organized by the Ministry of Youth and Sports, Governorate of Düzce, District Governorship of Gölyaka, Gölyaka Municipality, Federation of Developing Sports Branches, Turkey Aviation Sports and Düzce Martı Aviation Sports Association. The paragliders took off from 840-meter- and 740-meter-high hills and landed on a track in the aviation park, which is currently under construction. Besides various aviation vehicles such as the microlight, ultralight, gyrocopter, paragliding, free type parachute, sailplane and mosquito, model planes, model helicopters and multicopters flew over Düzce. President of Düzce Martı Aviation Sports Association Zeynep Kara said that they organized this event as they believed the aviation park in Düzce is a perfect venue for such an event. "We have signed a protocol with the Turkish Air Association. Our governor as well as district governor believed in us. So many people put their faith in us; we thank them all," said Kara.

Informing that the area where people paraglide is perfect for air flow, Kara continued, "The area features a hill that faces the northern winds, and another hill in the south along with a range. A paragliding person can easily catch a good thermic wind and fly as high as 5,000 meters. People can paraglide from here to Ankara in record times." Kara said that the aviation park will be used for international organizations as well and said there is a plan to build a new training center within the park. "This place will be a center where people who are interested can be trained in aviation sports," concluded Kara.
RELATED TOPICS