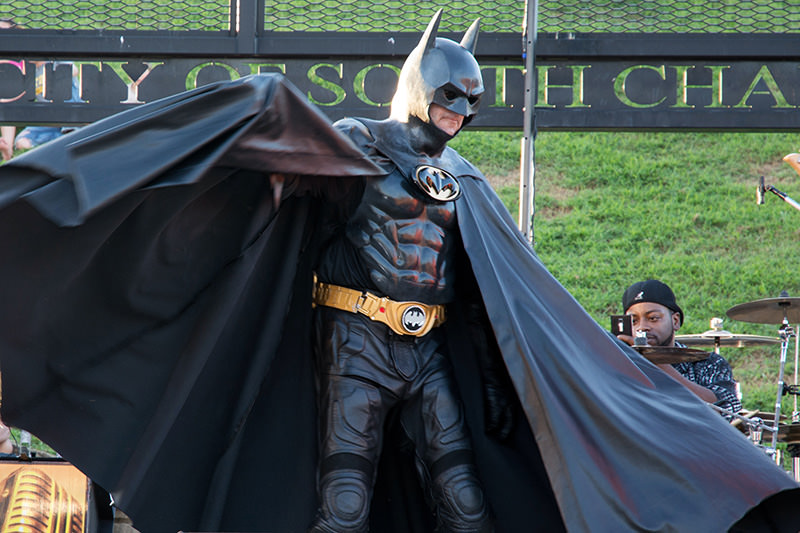 In this Aug. 15, 2015 photo provided by Linda Weekley, Leonard Robinson performs at SummerFest in South Charleston, W.Va. (AP photo)
by Associated Press Aug 18, 2015 12:00 am
A man who delighted thousands of children by impersonating Batman at hospitals and charity events died when he was hit by a car while standing in the fast lane of a highway, checking the engine of his custom-made Batmobile, police said Monday.

Leonard B. Robinson, 51, of Maryland, was returning from a weekend festival in West Virginia when he was struck by a Toyota Camry at about 10:30 p.m. Sunday west of Baltimore. Robinson had pulled his car onto the median, with the passenger side partly in the traffic lane, police said.

Police said the Camry also sideswiped the red-and-black Batmobile, a replica of the car used in the 1960s "Batman" television show. The Camry driver, a 39-year-old man, wasn't hurt and hasn't been charged.

Police said Robinson's car was uninsured and wore a license, "4BATMAN," that was issued to another vehicle.

Robinson, co-owner of an appliance repair business in Virginia, began visiting hospitalized children in 2001, masquerading as his son's favorite superhero, according to Robinson's website, www.superheroesforkids.org.

He gained national attention in 2012 when dashcam video surfaced of police in Maryland pulling him over while he was driving his black Lamborghini not the Batmobile replica dressed as Batman. Robinson traded the Lamborghini for the Batmobile later that year.

He averaged about 18 visits a year to hospitals, schools and charity events, handing out toys and t-shirts, giving "Batman" autographs and discouraging kids from bullying, according to his website and his father, Larry Robinson.

The Washington Post reported in 2012 that Robinson spent $25,000 of his own money on Batman-related items for kids every year.

Sharen Sumpter-Deitz, a board member of the South Charleston, West Virginia, Convention and Visitors Bureau, said Robinson had left for home Sunday afternoon after meeting hundreds of children over the weekend at the city's Summerfest, two daycare centers and a library. It was his third visit, she said.

"He made them feel like they were the most important person in the whole wide world when he was talking to them," she said.

DC Entertainment, the Warner Bros. Entertainment Inc. unit that owns Batman, said it was aware of Robinson's work and had no objections. The company posted a message on the official Batman Facebook page: "Our thoughts are with the family and friends of Leonard Robinson, who shared his love of Batman with everyone around him."