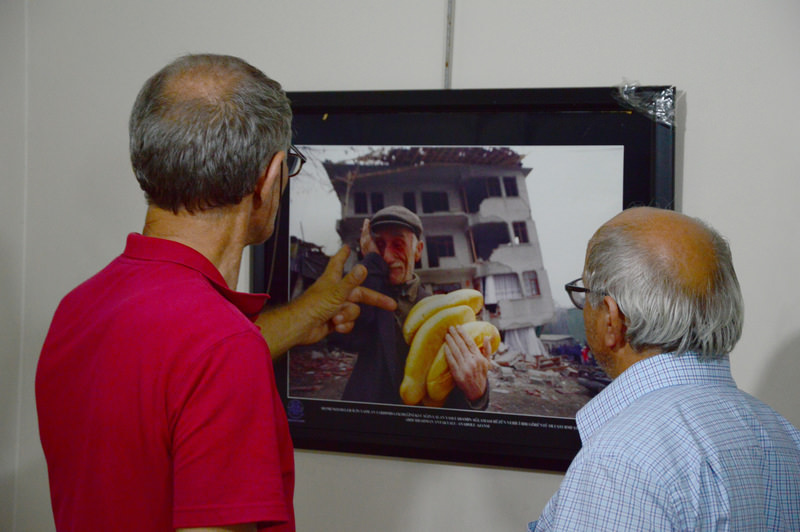 by Daily Sabah with AA Aug 19, 2015 12:00 am
An earthquake memorial museum opened by the Adapazarı Municipality in Sakarya pays tribute to those who lost their lives in the devastating 1999 İzmit earthquake that occurred on Aug. 17 with a magnitude of 7.4. Since 2007 the museum has displayed photographs of the 1967 and 1999 earthquakes as well as diaries and glass items with the names of earthquake victims written on them. It draws thousands of visitors every year. The museum, which was established in 2004, organizes earthquake trainings for students and is open seven days a week. A 45-second simulation mirrors the moment of the earthquake, which happened at 3:02 a.m. There is also a photo exhibition showing shots from around the region following the earthquake. Aside from the simulation, there is a special place commemorating the earthquake victims. "If they wish, their relatives can come and pray there," he said.

A rare museum concept in its kind, the building's interior architecture was designed like an art gallery and the exterior side was designed as if the building was damaged from an earthquake. Visitors can see some damaged walls and oblique pillars. There is also a seismograph and construction details about the buildings that were destroyed in the earthquake. A cinevision hall is also available.

Speaking to Anadolu Agency (AA), Rıdvan Sezer, the deputy mayor of Adapazarı district, said that earthquake victims suffered too much after the disaster, which also affected the greater Marmara region. Sezer said that prior to the earthquake there was a seven-story limit for buildings, but it was reduced to two stories following the earthquake. "Many heavily damaged buildings were maintained and those with irreversible damage were completely destroyed. The mu

nicipality destroyed around 400 buildings in this reason," Sezer said, adding that the metropolitan municipality takes necessary legal steps to this end. "I believe buildings in Adapazarı are becoming stronger in terms of construction infrastructure. He further recalled that some buildings might be week due to the earthquake and thereby homeowners should fortify the buildings if necessary. "We hope that Adapazarı will not be hit by an earthquake in such a devastating way, yet it could be unless required measurements are taken. We lost around 4,000 people," Sezer said. Currently, urban transformation is ongoing in the city's Erenler and Hendek districts as well as Adapazarı. He said that the biggest problem in Adapazarı is that buildings have many stories, which put them at risk. Described as the disaster of the century, the earthquake killed almost 18,000 people and left thousands more homeless. Buildings were also destroyed 80 kilometers away from İzmit in Istanbul. The earthquake's epicenter was about 11 kilometers south of İzmit. Certain historic buildings and monuments were also affected. The unfortunate results led to a boost in measures against disasters in the country.
RELATED TOPICS