Red sheep a symbol of reaction to terrorism 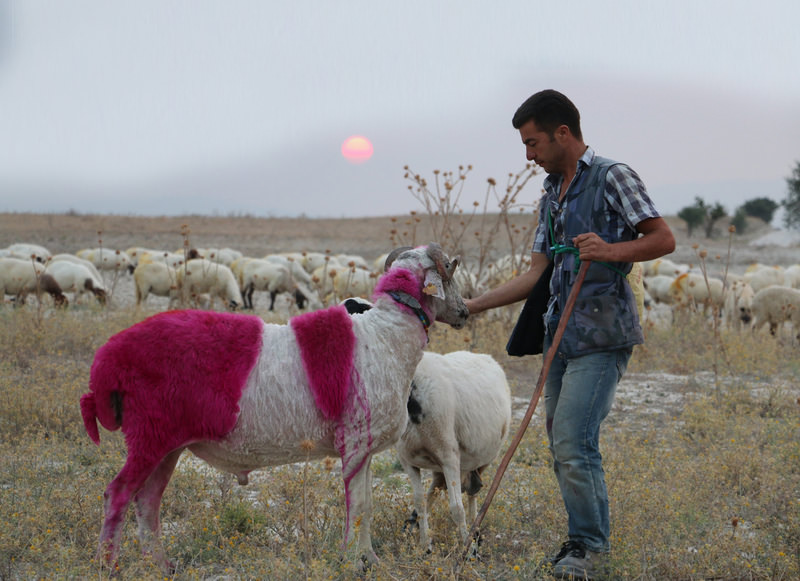 Shephers annually paint their sheep purple and make them cross a stream as part of a tradition in Denizli province. However this year they painted them in red as a symbol of their reaction to recent terrorist attacks in Turkey

Shepherds in Denizli's Çal district joined forces and painted their sheep red to protest the recent terrorist attacks. Since the annual contest among shepherds in which they pass their sheep across a stream was canceled, the shepherds met in the Aşağıseyit neighborhood before sunrise. They wrote "Şehitler ölmez, vatan bölünmez" (martyrs don't die and our homeland cannot be divided) on their saddlebags and painted their sheep red instead of purple like every other year in order to condemn the terrorist attacks. A total of 39 shepherds who brought their sheep from the districts of Çal, Baklan and Çivril, reanimated the migration of the yörüks (Turkish nomads) with their kangal dogs and herds. Later they visited the tomb of Martyr Kurt Ali in the Aşağıseyit neighborhood.

The shepherds tried to help their herds cross over the Büyük Menderes River in order to show their loyalty and love. The shepherds got into the water and herded their sheep with their whistles. The shepherds also sing "mani" (a form of poetry) to encourage their herds while crossing the river.

Musa Kol, 11, who participated in the competition, told Anadolu Agency (AA) that he did not manage to get his sheep across the river, but that we will certainly do it in the upcoming year. Nurhan Akgündüz from the Çivril district said the competition used to be full of festivities, however the official ceremonies were canceled due to the terrorist attacks and casualties. "We shepherds are competing against each other with broken hearts this year. We decided to paint our sheep red instead of purple to protest the terrorist attacks. Some of our friends had Turkish flags embroidered on their saddlebags while others had the phrase 'Şehitler ölmez, vatan bö

lünmez' written on them. We do not want young people to die anymore," Akgündüz said. The annual competition held in Aşağıseyit is based on a legend. As the legend goes, a man from the Karakoyunlu tribe was hired as a shepherd for one of the Oğuz beys. The shepherd was loved by everyone in the village in a very short time and asked for the hand of the bey's daughter in marriage. The bey did not want his daughter to marry the shepherd and tried to give the shepherd an impossible task in order to marry his daughter. He said the shepherd must feed his sheep with salt and get them across the Büyük Menderes River without drinking a drop of water. The shepherd accepted the challenge and was victorious.

The bey did not keep his promise and his daughter fell ill and died. Dismissed and kicked out of the village, the shepherd spent the rest of his time in the mountains playing the pipe. As the local people are inspired and affected by this story, the shepherds organize a similar exchange in order to show their respect to this great love story.
Last Update: Aug 26, 2015 3:39 pm
RELATED TOPICS