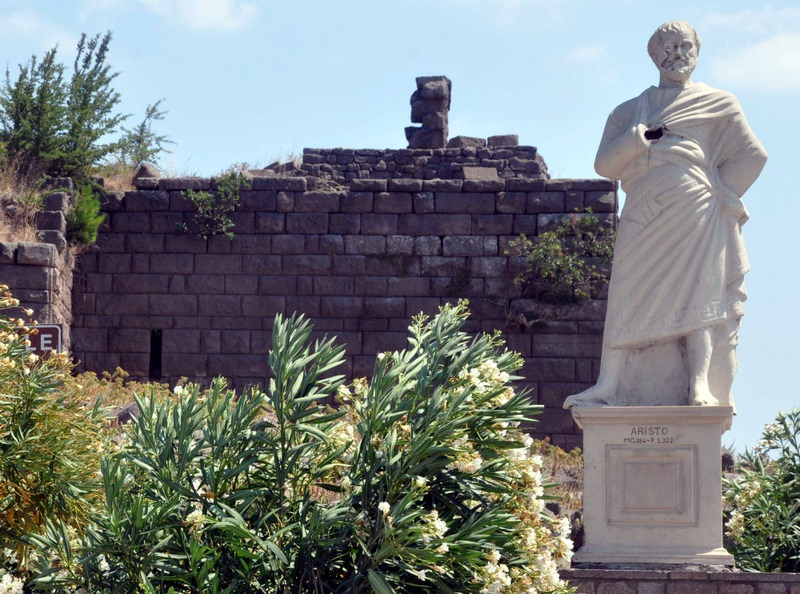 by Daily Sabah Aug 28, 2015 12:00 am
A statue of Aristotle, which was erected six years ago by the Culture and Tourism Ministry in the historical coastal town of Assos, was vandalized on Wednesday by unknown assailants. The statue's right arm and face were seriously damaged during the attack.

The 2.5-meter-tall statue was sent to İzmir by the Behramkale Village mukhtar (village head) for repairs. After the repairs are completed, the statue will return and be put back in the same place in Assos.

Located in the Ayvacık district of the northwestern Çanakkale province, Assos is known as the first place that Aristotle established a philosophy school. In 1980, Professor Ümit Serdaroğlu unearthed the historical city, as well as its theater, agora, council building, port, necropolis and gymnasium.

Since the death of Serdaroğlu, excavation work has been continued by a group pioneered by Nurettin Aslan, an associate professor of Çanakkale University's Department of archaeology.

Regarded as one of the most important philosophers in history, Aristotle held a dialogue with Plato, his teacher and the student of Socrates, in his academy in Athens. Then, Aristotle established his own school in Assos where he taught and lectured.
Last Update: Aug 28, 2015 11:02 am
RELATED TOPICS