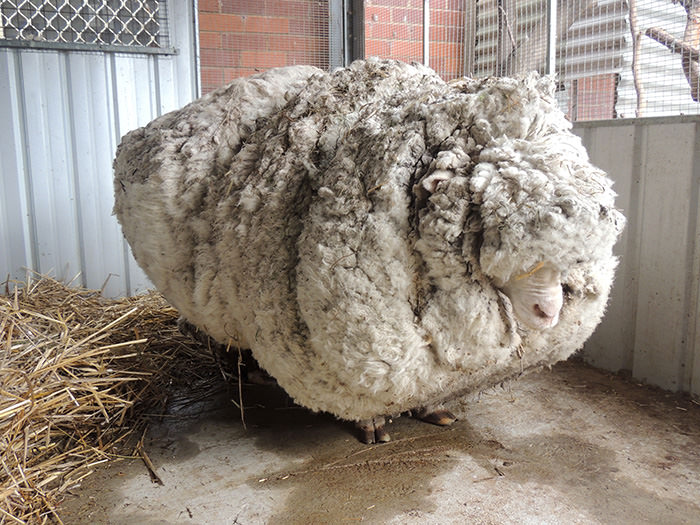 by Associated Press Sep 03, 2015 12:00 am
A lost, overgrown sheep found in Australian scrubland was shorn for perhaps the first time on Thursday, yielding 40 kilograms (89 pounds) of wool the equivalent of 30 sweaters and shedding almost half his body weight.

Tammy Ven Dange, chief executive of the Canberra RSPCA, which rescued the wild, castrated merino ram dubbed Chris, said Thursday she hoped to register the fleece with the Guinness World Records. An official of the London-based organization was not immediately available for comment.

The fleece originally weighed in at 42 kilograms (93 pounds), but that included the weight of the wool bag.

The woolly coat dwarfs that of New Zealand's hermit ram dubbed Shrek, who spent six years hiding in caves to grow his ragged fleece that weighed 27 kilograms (60.5 pounds) when it was clipped in 2004. Shrek was often described as a record.

"He's looking really good, he looks like a new man," Ven Dange said, as the now 44-kilogram (97-pound) sheep recovered at the Canberra animal refuge. "For one thing, he's only half the weight he used to be."

Champion shearer Ian Elkins said the sheep appeared to be in good condition after being separated from his huge fleece under anesthetic.

"I don't reckon he's been shorn before and I reckon he'd be five or six years old," he said.

Chris was found near Mulligans Flat Woodland Sanctuary outside Canberra by bushwalkers who feared he would not survive the approaching southern summer. He was found several kilometers (miles) from the nearest sheep farm. A bushwalker named him Chris after the sheep in the "Father Ted" television comedy series.

Chris was rescued by the RSPCA on Wednesday and taken to Canberra, where he was shorn under anesthetic because he was stressed by human company and because of the potential pain from the heavy fleece tearing skin as it fell away.

Ven Dange said he had suffered skin burns from urine trapped in his fleece and could have died within weeks if left in the wild.

"When we first brought him in yesterday, he was really shy, he was shaking, he would move his head away from people and he could barely get up and walk," she said.

"The drugs might be wearing off right now, but he's actually coming to you and actually wants a pat. He's certainly moving a heck of a lot better," she added.

She said Chris would be found a new home after vets gave him an all-clear.

Elkins said the fleece was too long to be sold commercially. He hoped it would end up in a museum.

"I wouldn't say it' high quality, but you wouldn't expect it to be running around in the bush that long unshorn," he said.