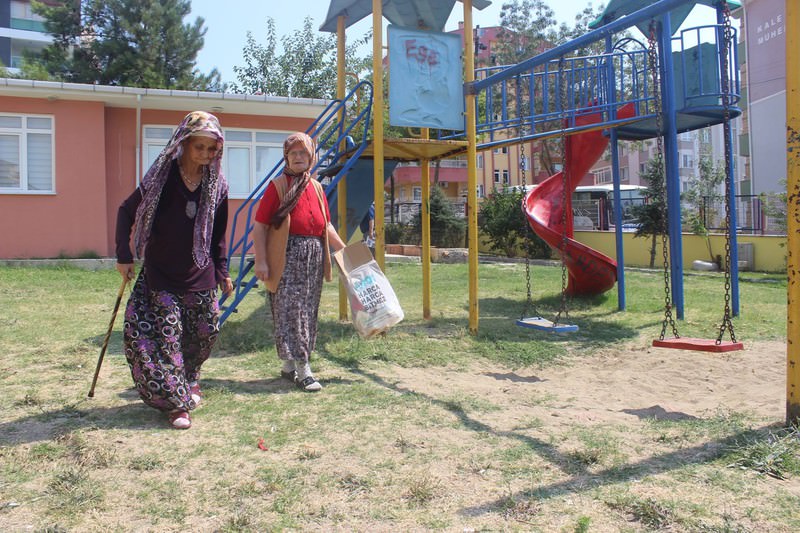 In this Sep 8, 2015 file photo 82-year-old Gu00fclsu00fcm u00d6ztoprak and 80-year-old Mu00fczeyyen Tabakou011flu clean their neighborhood park to set an example. (IHA Photo)
by Abdullah Kızıltaş Sep 08, 2015 12:00 am
82-year-old Gülsüm Öztoprak and 80-year-old Müzeyyen Tabakoğlu who live in Edirne, have been cleaning and picking up trash every morning and evening in the neighborhood park for the past seven years. In addition, by collecting blue water bottle caps and waste batteries, these old ladies showcase eco-friendly and true exemplary behavior.

The grandmas completely clean the park with bin bags in their hands every day, and expect no reward or payment in return. They say that they want to set an example to young people and the community.

82-year-old Gülsüm Öztoprak said "We love cleaning. This is something that comes instinctively. Nobody tells us to clean here. But we want to clean it. We have been doing so for 7 years.
Öztoprak said that they wanted to be role models for the younger generation.

"For example, when I see trash on the ground, I warn young people to throw it away [in bins]. They say 'Let it go grandma, mind your own business," said Öztoprak.

The 80-year-old Müzeyyen Tabakoğlu said that she previously worked in the cleaning business, and added that the floor she cleaned was spotless. "For this reason cleaning is [like] my job. We want to be an example for children," she further added.

The local headman of Şükrüpaşa Irfan Tasmalı has been continuously supporting the two old ladies. Tasmalı stated that the grandmas should be a model for the people of Edirne and Turkey.

"The greener and cleaner the city, the more peaceful the people are. We should not expect everything from municipalities and local headmen. Despite their old age, these ladies want to set an example for young people," said Tasmalı.

Also last year, 75-year-old Kıymet Peker, who lives in Edirne as well, stopped bulldozers from demolishing the park next to her own house. She sat on a chair in front of the bulldozers and protested the project. The demolition was stopped and the project was taken to court, thanks to Peker's protest.