Cirkopolis show to perform in Istanbul 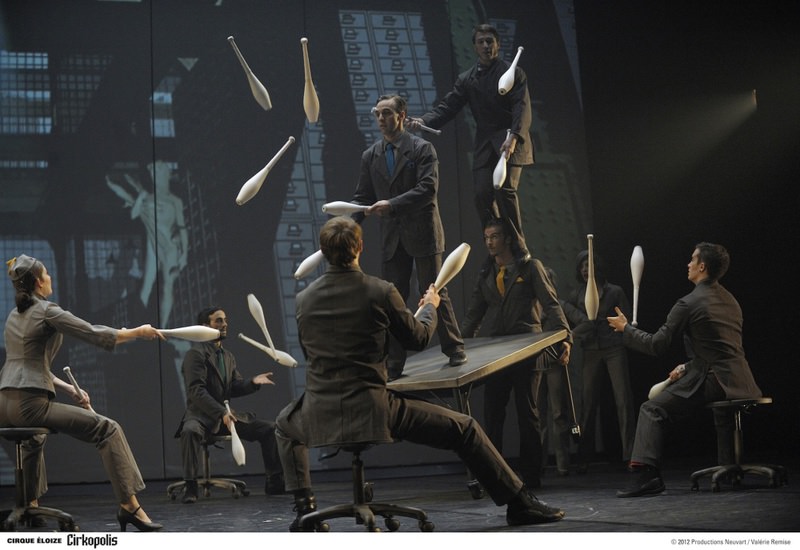 by Daily Sabah Sep 14, 2015 12:00 am
"Cirkopolis," a 90-minute circus-theater performed by the Cirque Eloize troupe of Montreal, will make its debut in Turkey on Oct. 9 and run through Oct. 11 at Istanbul's Zorlu Performing Arts Center (PSM). Having already reached 20 million viewers in more than 40 countries around the world, Cirkopolis presents 12 acrobats and multidisciplinary artists combining circus, dance and theater in one performance. Set in a factory-city, the performance showcases aerial artists, jugglers and contortionists accompanied by an original musical score and video projections. The art of Cyr wheel reaches perfection with acrobats only dreaming of dance. Designed by co-founder Daniel Cyr, the hoop allows circus performers to demonstrate numerous complex acrobatic poses. Another risky stunt involves the large German wheel, which resembles a hamster cage. All performers will push the limits of danger during the performance.

"Cirkopolis was imagined as a crossroads – between imagination and reality, between individuality and community, between limits and possibilities. The show is driven by the poetic impulse of life, the physical prowess of the circus and the humor, at once serious and light-hearted. Entering Cirkopolis is all about letting go and allowing yourself to be borne aloft by hope," said Jeannot Painchaud, the creative director of Cirque Eloize and co-director of Cirkopolis in a statement.

Since 1993, Cirque Eloize has been staging moving performances mingled with innovative circus art. Along with its 10 original productions, the team designs special events. They have taken part in prestigious festivals like the Edinburgh Festival, Hong Kong Festival and Chekhov International Theater Festival as well as appeared at prominent venues, including the Sydney Opera House and Lincoln Center for the Performing Arts. Cirque Eloize was also nominated for Broadway's Desk Awards in 2005 and has won eight medals and prizes at the Festival Mondial du Cirque de Demain in Paris. The company, which includes more than 100 staff working on different projects, organized the first festival of circus arts in North America, La Semaine des Arts du cirque, and established a foundation to introduce circus arts to the youth. The troupe "Artcirq," comprised of young Inuit living in Canada's far north, is the first organization to benefit from Cirque Eloize's youth outreach. Tickets for the exciting show can be purchased at www.tixbox.com.tr.
RELATED TOPICS