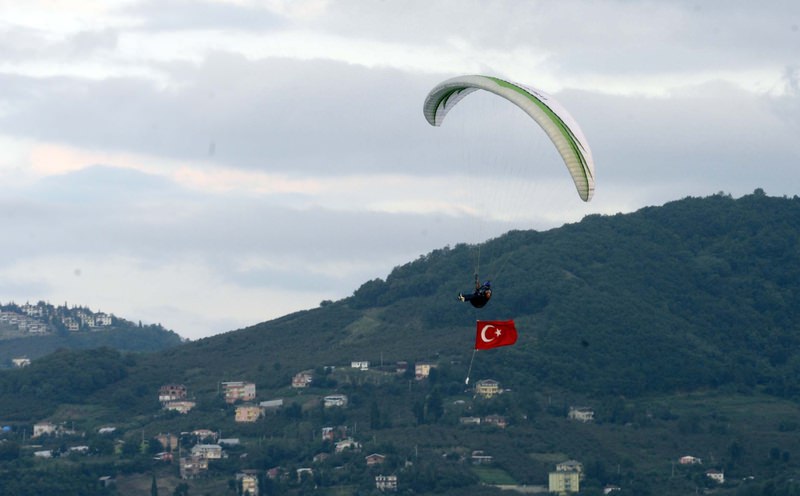 Surrounded by dazzling nature wondrous and a fresh atmosphere, tourism in the Black Sea region has been increasing as the region offers many alternative tourism opportunities. One of them, paragliding, has become very popular in the region in recent years

With its spectacular nature, fresh weather and historical structures, the Black Sea region is becoming a hub for tourism – attracting both local and international tourists with its alternative tourism opportunities, including those looking to paraglide. A popular tourist destination, the Black Sea region stands out in the tourism industry with its underground havens like Karaca and Çal inns, glacial lakes, streams, ponds, forests embracing all tones of green, a wide-range of flowers and endemic plants adding color to nature, highlands, traditional cuisine, chilly weather, historical buildings like the Sümela Monastery and the long coastline.

Hosting many tourists in each season, the region offers alternative tourism opportunities including trekking, bird observation, thermal tourism and heli-skiing – a kind of snowboarding accessed by a helicopter. Tourists can have a picnic and enjoy the fresh air away from Turkey's big cities' busy atmosphere, or taste traditional food. In recent periods, paragliding has gained popularity in the Black Sea region as well.

Speaking to Anadolu Agency (AA), Trabzon Akyazı Aviation Club President Kutsal Özsoy said he has been interested in paragliding and aviation since he was a child, adding that more people have come to paraglide in the Black Sea region in recent years. Those who want to participate in the club are first sent to the Turkish Air Association (THK) for training. Özsoy said following being trained, anyone can go paragliding. He underscored that the region is highly suitable for this sport, especially the city of Trabzon. "Paragliding can be done in the Black Sea region. The geography is very suitable for this sport. Many people show interest in it and want to take lessons. We send them to THK, and later they participate in the club. If you comply with the rules, paragliding is very safe. You must pay attention, though. If you receive proper training, you can easily do it," he continued.

Ersan Saraç, the club's vice president, said he has been engaged in aviation for almost three years. "The Black Sea region is advantageous in terms of aviation. We sometimes take our water and food and stay in the air for hours. We go paragliding here and enjoy flying, the biggest wish of human kind, just like birds for hours," he said. Saraç agreed that the region's highlands are very advantageous for paragliding. "Our region, especially the highlands, is very suitable to learn or teach paragliding. They are safe areas. We provide training on the safest tracks with 25, 50, 75, 100 and 200-meter-heights. Those who successfully pass the training course can go paragliding in Trabzon's Akyazı neighborhood," Saraç said. Aside from Trabzon, there are suitable paragliding spots in Ordu, Giresun, Rize, Artvin and Samsun. "They also enjoy the region's beauty," he added. Saraç said aviation is an important recreational activity and there are clubs for anyone interested. "We invite everyone to try paragliding, as the clubs offer technical gear and materials and the region is very advantageous," he stressed.

The Black Sea region attracts more local and foreign visitors each day with its rivers surrounded with green land, natural spring water, fresh atmosphere and dazzling nature. The region's tourism has rapidly developed in recent years as well. New touristic areas and five-star hotels, as well as TV series set in the Black Sea region that depict the region's nature, traditional attire, dialects and local culture, are some of the main factors behind this. Along with highland tourism, cultural and commercial tourism have also drawn much attention. Last year, the eastern Black Sea region drew 4.5 million tourists itself with its incredible nature and flora as well as cultural and historical attractions.
RELATED TOPICS