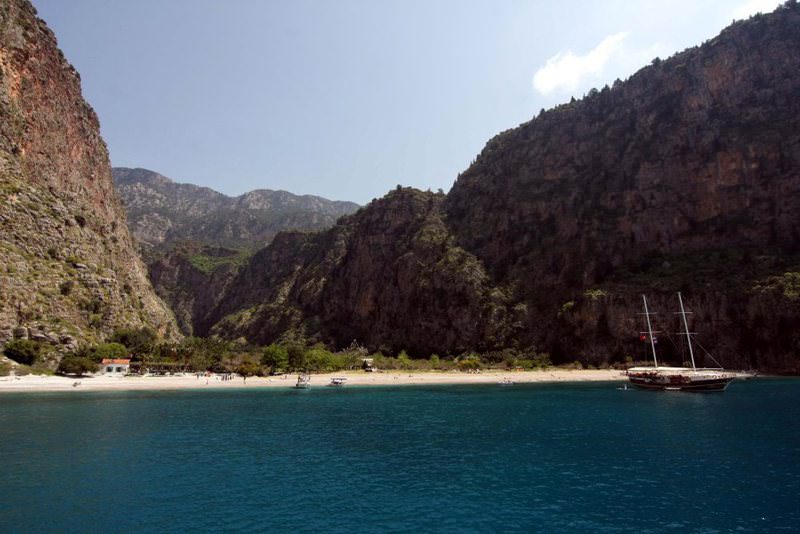 Hidden among steep cliffs as high as 350 meters, Butterfly Valley in the touristic Fethiye district attracts great attraction due to its spectacular landscape and climbing routes. Recently, special roads were built in the region to offer more safety to climbers

With more than 80 butterfly species, Butterfly Valley in Muğla's Fethiye district grabs the attention of visitors not only for the sea, the beach and the sun, but also adventure sports. Hidden among steep cliffs as high as 350 meters, the nature haven attracts many tourists with its magnificent views and adventurous tracks. The valley is largely preferred by those interested in camping and offers an unforgettable holiday experience surrounded by nature. A waterfall, whose spring is located in the Faralya neighborhood, reaches the sea through a stream cutting through the middle of the valley. The waterfall flows at a height of more than 50 meters. Tourists walk 1 kilometer to reach the waters through a forest pathway and climb rocks at different heights. Visitors who would like to visit Faralya via the forest pathway can also observe the magnificent view of the valley while walking along the steep cliffs of the foothills.

The valley drew hundreds of tourists when the tourism season began. The district governorship took extra measures when seven people were injured while climbing on the rocks without proper equipment, including unsafe ropes. A delegation paid a field visit and closed the area, where they found slippery rocks. As a result, more protective measures were taken and signs were erected for visitors warning them to take proper climbing equipment with them. A special system that is used in European countries, "via ferrata" (Italian for iron road), was established to offer safe climbing. Iron rods were placed on the rocks in order to allow visitors better access to the waterfall. Presently, tourists climb to the waterfall with Salim Seren, a climbing coach at the Turkish Federation of Mountaineering. Speaking to Anadolu Agency (AA), Fethiye Governor Ekrem Çalık said the valley attracts local and international tourists with its dazzling nature. Regarding the accident earlier this year, he said: "We inspected the area with a committee that was recently formed. The committee discovered that the visitors were injured because they tried to climb the waterfall without the necessary equipment and the rocks are slippery. Hence, we closed the area after placing a warning sign." Visitors are able to climb the waterfall via the iron rods that have been placed on the rocks and are accompanied by mountaineering experts after certain safety measures are taken. Çalık said they aim to introduce the district to visitors while ensuring their safety and security.

Seren said they are trying to show local and international tourists that Butterfly Valley offers adrenalin-pumping sports as well as beauty and relaxation. Seren added that they organize rock climbing and zip lining activities in the canyon and near the waterfall, adding they will also begin organizing activities related to canoeing and water skiing. He said that people with almost no rock climbing or mountaineering training can easily climb the rocks via this system and see the natural beauties overlooking the waterfall. "We are trying to offer every opportunity we can to visitors. People can come here and experience whatever adventure sport they want," Seren said.
RELATED TOPICS