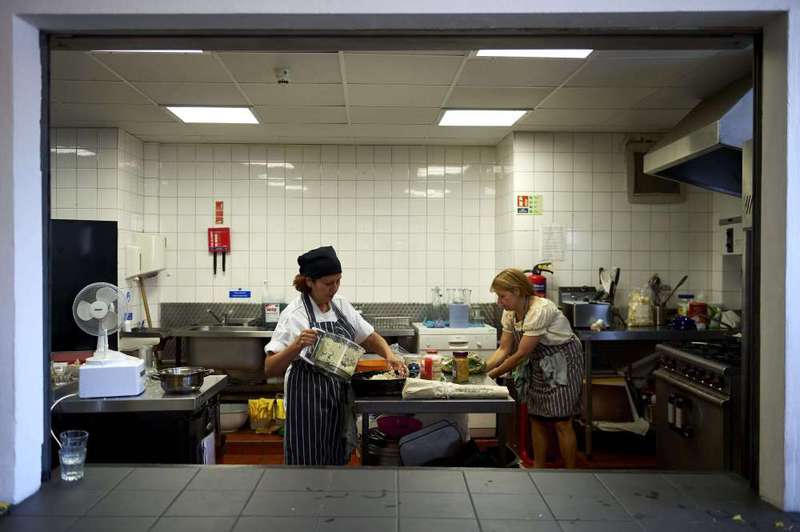 Seven female immigrants who are chefs from Iran, Ethiopia, Brazil, Peru, Nicaragua, Senegal and Turkey bring the tastes of their homelands out of the Ovalhouse theater in London

In a feminist restaurant housed in a theater, seven immigrant female chefs are bringing a taste of their homelands to Londoners, while earning themselves a stake in British society.

"We want to give power to the invisible women around the world," said Roberta Siao, the 43-year-old Brazilian who runs the kitchen at Mazi Mas, as she worked away on preparing her passion fruit specialty.

The restaurant is housed in the Ovalhouse theater, directly opposite the Hobbs Gates entrance to The Oval, south London's famous cricket ground. She told Agence France-Presse (AFP) that without contacts or a network of friends, she could not find a job despite her qualifications and years of experience working at the Central Bank of Brazil. After several years spent bringing up her son, meeting the creator of Mazi Mas changed her life. "Mazi Mas was the bridge that really took me from being completely isolated to put me in the world of work, people and opportunity," she said.

"Marlith's ceviche," "Roberta's passion fruit mousse" and "Ezgi's börek" – spinach, feta cheese and filo pastry – are some of the items on the menu. The house style is the cuisine of Iran, Ethiopia, Brazil, Peru, Nicaragua, Senegal and Turkey, which customers can sample from Tuesday to Saturday. The "pop-up restaurant" – so-called because it has shifted its venue since its launch in 2012 – takes its name from the traditional Greek welcome "Elate na fate mazi mas," which means "Come eat with us."

Its creator, Nikandre Kopcke, grew up in New York City and took her inspiration from her Greek nanny, whose dream of running her own bakery was squashed by her traditionalist husband.

Mazi Mas started out in another theater in Hackney, a poor-turned-hip district northeast of the city center, and also provided catering for private soirees, notably at the Tate Modern gallery.

It has been at the Ovalhouse since March on an arrangement that will keep it there until at least the end of the year. The restaurant pays no rent to the theater, only its gas, water and electricity bills.

Mara Klein, the 27-year-old German responsible for developing the enterprise, said it was a "very good partnership" for both sides because the restaurant's customers buy their drinks at the Ovalhouse bar. The theater used to be an important meeting place for political activists and is looking to revive its position as a busy hub. The homelessness charity Emmaus U.K. provides the donated tables and chairs, which customers can purchase at the end of each month.

Due in part to these cost-cutting arrangements, the part-time chefs earn a wage of 9.50 pounds ($14.40) an hour, as opposed to the 6.50 pounds paid to those on the national minimum wage.

"Mazi Mas gives us the chance to promote our own cuisine and culture," said Marlith Tenazoa Del Aguila, speaking in Spanish. For several years the flamboyant 50-something ran her own restaurant-cum-disco on a beach in Peru, but struggled to find work in the U.K. with her limited grasp of English.

For Ethiopian Azeb Woldemichael, working alongside her, the restaurant has brought her "self-confidence."

She feels the experience has taken her one step closer to her dream of opening her own cafe. "We provide employment opportunities for migrant and refugee women who have the dream of opening their own business but who don't have the platform, the network, the connections or just the confidence to take that step," Klein told AFP. Mazi Mas is a "business incubator", she said.

Klein said the restaurant also stands for the rights of immigrants, recognizing their existence and the benefits they can bring to British society.

One regular diner, Laura Harrison, 24, said she was drawn to the "real sense of community around the food." "The cause behind it all is amazing," she said.

David Crabtree, a consultant brain surgeon eating at Mazi Mas for the first time, said: "My wife used to take me for dates in strange places and she brought me here. The food is absolutely excellent, it's obviously prepared with love and the atmosphere is very good."The restaurant is full most nights and a second restaurant should open in London's trendy Shoreditch district at the start of next year before another, more permanent outlet in the middle of 2016.

Some 40 would-be chefs are on the London waiting list. A Mazi Mas has opened in Sydney, and operates exclusively with female asylum seekers as chefs. Other plans to open outlets in Berlin, Lyon, France, and Leeds in northern England are already under way, said Klein. "There should be a Mazi Mas in every borough of London and all over the world, really," she said.