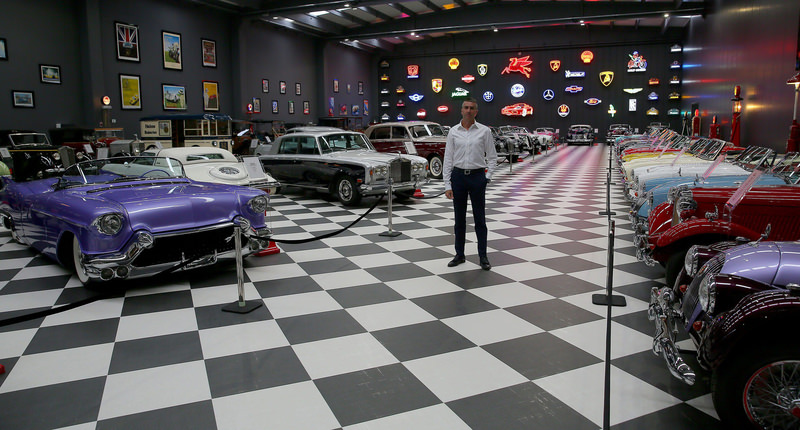 The museum's oldest car is from 1886 and visitors can see a special collection of automobile-themed scarves, advertisement posters from the 1950s and fuel pumps produced between 1900 and the 1960s.
by Daily Sabah with AA
Oct 12, 2015 12:00 am

Regardless of their shape and color, classic cars can be fun for all ages. Sometimes they turn into a passion as seen in the Key Museum, an İzmir-based classic car museum displaying 130 vintage cars and 40 motorcycles. The museum's oldest car dates from 1886 and visitors can see a diverse range of cars along with 2,500 model automobiles, a special collection of scarves with automobile themes, 300 hood ornaments that decorated cars before World War II, advertisement posters from the 1950s and fuel pumps produced between 1900 and the 1960s. There are also gas station accessories from the 1950s.

Murat Özgörkey, the museum's founder, told Anadolu Agency (AA) that their passion for classic cars goes back to 2002 when his brother Selim bought and restored an old model Jeep. The two brothers then decided to collect old luxury automobiles, for which they operated the brand's Turkey franchise, and showcase them at a gallery. The more classic cars have become a passion for them, the more it was easy to collect, Özgörkey said. When the number of cars reached a sufficient number, the brothers decided to open a museum.

Opened last summer, the Key Museum features renovated classic cars, all of which were in bad condition at first. Initially, they started to gather different car models around Turkey, yet they have now also been bringing classic cars from abroad for the last six or seven years. Most of the displayed cars are not available in Turkey. "Some of them were on sale in Turkey for a short period of time. We formed a special team and gather cars with original parts as much as possible," he said, adding that the company is one of the few firms that engage in automobile collecting. Özgörkey said that some of the cars on display are now in better condition following their restoration. A car's restoration takes at least six months and the staff exerts great effort to make them look as good as possible. More classic cars will be brought to the museum in the future, Özgörkey said.

"All cars are working and there are still some other classic cars that need resoration. We are planning to add new sections to the museum," he said. Özgörkey is also proud to have some replicas of the Batmobile used in the 1966 Batman movie. When he was a child he used to play with a model of the Batmobile, so the car has a special place for him. Stretching over 7,000 square meters, the Key Museum presents early model BMWs, Minis, Mercedes-Benz, Cadillacs, Fords and Porsches. No monetary value is available on the cars. The oldest classic motorcycles in the museum go back to the 19th century. With their unique details, they reflect the exciting world of early two wheel motoring. Some of the hood ornaments on display were elegantly designed by French designer Rene Lalique. There are 39 scarves taken from the collections of world-famous fashion brands. The Key Museum is the result of the brothers' mutual and keen passion for cars for over 10 years. Despite opening only a few months ago in İzmir's Torbalı district, Key Museum has already grabbed the interest of visitors. Özgörkey said they expect more visitors as certain travel agencies added the museum to their cultural travel programs. The museum is open five days a week, from Wednesday to Sunday, from 10 a.m. to 5 p.m. The entrance fee is TL 20 ($6.87).