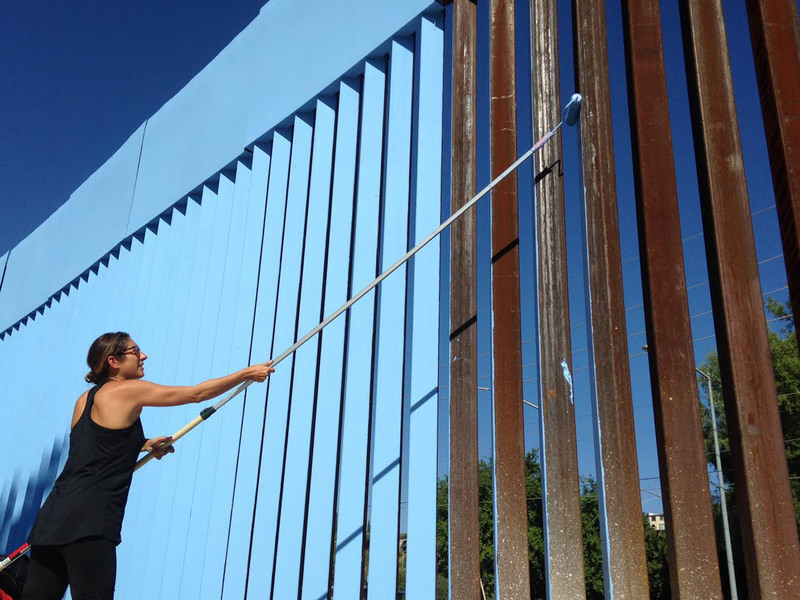 Artist Ana Fernandez paints the Sonora border fence blue as part of the art installation, ,Erasing the Border,, in Nogales, Mexico,Tuesday, Oct. 13, 2015. (AP Photo)
by Associated Press
Oct 13, 2015 12:00 am
In a world where new borders are put up everyday, a California-based artist plans to paint the U.S.-Mexico border fence"invisible".

Ana Teresa Fernandez is leading an effort to paint the border fence that divides the U.S. and Mexico to make it blend in with the landscape.

She and a group of 30 artists and painters began their work on the border fence in Nogales, Sonora and Nogales, Arizona, on Tuesday.

FernÃ¡ndez wants to make a political statement about the border by painting it blue that it appears to be invisible.

FernÃ¡ndez did a similar project in 2012 on the Tijuana, Mexico, beach, risking arrest. This time, she has permission from Mexican authorities to paint the fence from the Sonora side of the border.

But organizers say they're not sure how U.S. authorities will respond to people using ladders on the border fence. The painting will continue throughout the day.
Last Update: Oct 13, 2015 9:39 pm