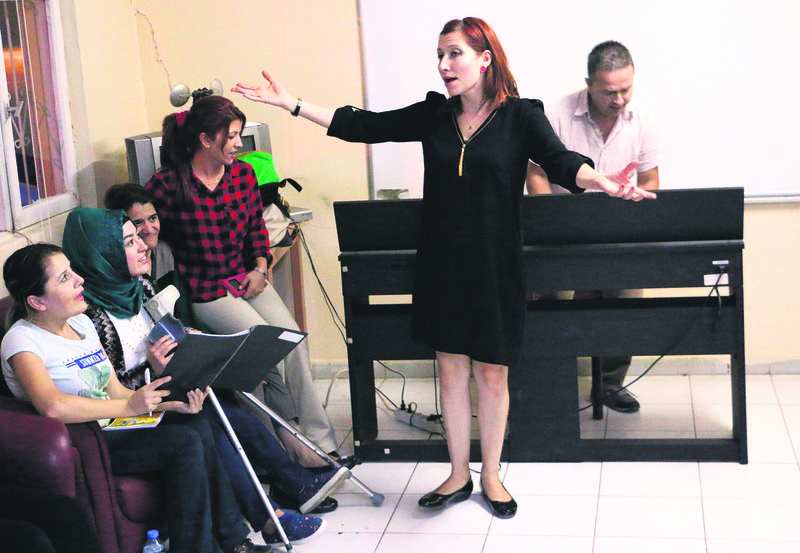 by Anadolu Agency Oct 27, 2015 12:00 am
Twenty-four people with physical disabilities are improving their talents through music in a polyphonic choir as well as adapting themselves to social life through the Disabled Talents Project, organized by Mersin Arts and Sport Club for People with Disabilities. Speaking to Anadolu Agency, project coordinator Özen Kababıyık said that the project encourages people with disabilities to achieve success in culture and arts. With contributions from the Social Support Program (SODES), the Disabled Talents Project includes 24 members who were chosen after an assessment. Kababıyık said that they have received many applications for the choir.

The polyphonic choir is full of people who want to show the best of themselves through music. "They are willing to show how they can be successful in the world of music. They want to say 'we are here'," Kababıyık said. She said that the project also provides psychological support to the participants. The members are given different courses including singing, repertoire, singing in a polyphonic choir and how to use voice effectively. "These training sessions not only improve their musical talents but also help them to avoid negative thinking and other things that they suffer from in their daily lives. We also offer them therapy sessions to inform them about physiological disorders and how to deal with them," Kababıyık said.

The choir is planning to give concerts at festivals throughout next year and produce a video clip to reach a larger audience. They will perform songs at historical venues for the video clip. "I believe we can create a better awareness of people with disabilities through our efforts. We are at the beginning of the project but they exert great effort," she said. A member of the chorus, Ferhat Şaş, said that he has good relationships with people and has improved his ability to communicate with others. "The fact that all the choir singers have a disability gives me strength. We support each other and have stronger relationships," he said. Bedrana Özlem Panayır also said that she is happy to be included in the project.
RELATED TOPICS