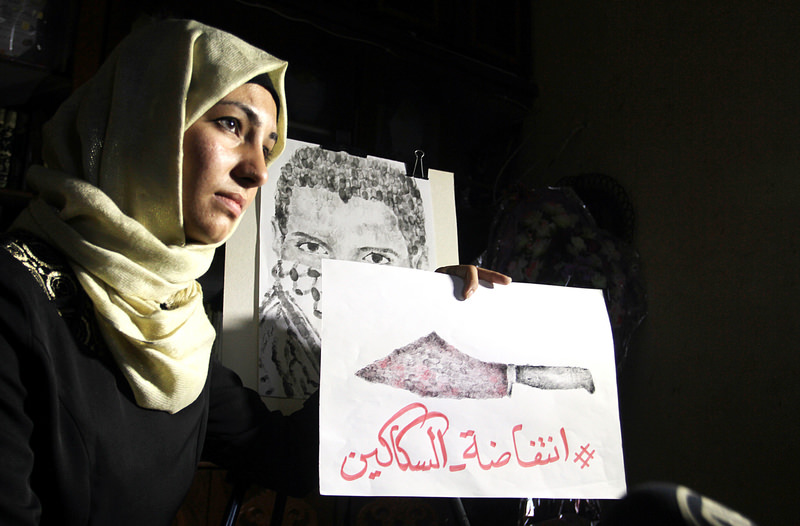 Palestinian artist Tesnim al-Cemel, a fine arts student, illustrates the Palestinian resistance in her own way through colorful finger paintings

Tesnim al-Cemel is a 20-year-old Palestinian student of fine arts who illustrates the uprising of the Palestinians, which started as a resistance to Israel's violations regarding the Al-Aqsa Mosque, with her fingers. She said she can use the influential language of painting to tell the world about the difficulties that Palestinians face every day.

Al-Cemel lives in Rafah, located in the southern Gaza Strip. Speaking to Anadolu Agency (AA), she said she always wanted to be a part of the uprising that Palestinians organized in Jerusalem, the West Bank and the Gaza Strip to stand against Israel's violation in Al-Aqsa. "At first, I did not know how I could help Palestinian youth. Now I support the uprising through my paintings that display the Palestinian cause, which I color with my fingers," al-Cemel said. Al-Cemel began painting with her fingers about four months ago. Her two completed paintings are currently displayed at the faculty and they receive positive feedback from both the faculty, as well as students. Al-Cemel attempts to animate the scenes that stand out during the revolt of the Palestinians. According to Al-Cemel, painting has an influential language, and it can be used to make the Palestinians' voice heard in the international arena.

Al-Cemel conducts research on social media networks to find the most striking photograph to draw and color with her fingers. "I print the photographs that I choose online and draw them with a pencil on canvas. Then, I color the draft with my fingers. My fingers are always covered with paint because of the technique I use; however, I do not mind, and, in fact, I really like it," al-Cemel said.

Al-Cemel claimed that the finger coloring technique differs from other traditional painting techniques, and added her technique is not commonly used in Palestine. She highlighted a total of 11 posters named "Jerusalem, West Bank and Gaza Strip Uprising," that are hanging on her bedroom wall. "I once painted a girl holding a key that symbolizes the return of the Palestinians to their homelands. I wanted to emphasize that we will never give up hope to return to our home. I also drew a blade like the shape of Israel's map to highlight the fact that a blade creates great fear among Israelis," she said.