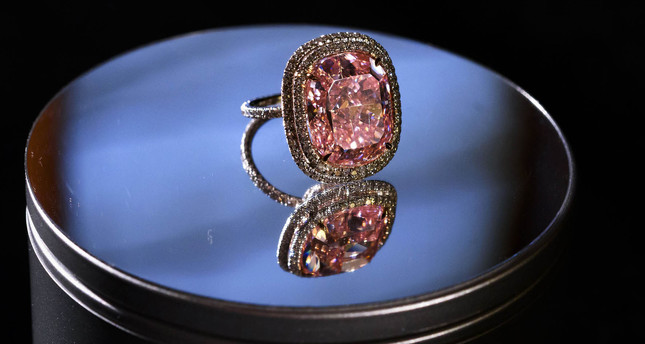 An unidentified Chinese buyer purchased a 16.08-carat vivid pink diamond at auction for 28.7 million Swiss francs ($28.5 million) including fees on Tuesday, a record price for a stone of that type, Christie's said. The cushion-shaped diamond, set in a ring and rounded with a double row of smaller white diamonds, was the showcase piece in the 409-lot sale of jewelry. Excluding fees, the stone, first known as "The Pink," sold for 25.5 million Swiss francs within the pre-sale estimate range of 21 million to 27 million Swiss francs ($23 million to $28 million). François Curiel, Christie's president for Asia, identified the buyer only as a "Chinese client who lives in Hong Kong." House spokeswoman Alexandra Kindermann said the price was a record for a vivid pink diamond at auction. The buyer promptly named the stone, "Sweet Josephine," she said.

The sale came as part of a two-day blitz of high-priced jewelry sales in Geneva. On Wednesday, rival Sotheby's puts up the 12.03-carat Blue Moon Diamond, with a pre-sale estimate is $35-$55 million. At the high end of the range, it could eclipse the record auction price of more than $46 million set by The Graff Pink five years ago. Christie's says the pink diamond sold on Tuesday had the rare attribute of having no secondary color and had earned the "Fancy Vivid" color grading from the Gemological Institute of America. Only one in 100,000 diamonds has color deep enough to merit the "fancy" moniker in jewelry parlance, the auction house said. Industry insiders note that the overall diamond market has softened in recent months because of slowing in economic growth in places like China and elsewhere, but that high-end diamond sales like highly priced artwork are a niche market seen as long-term investments for the most well-heeled.

Share on Facebook Share on Twitter
Previous in Life Erciyes, one of Turkey's most popular winter sports and tourism destinations,... Next in Life The "Engelsiz Ev" (Accessible Home) project was initiated by the Konya...
DAILY SABAH RECOMMENDS