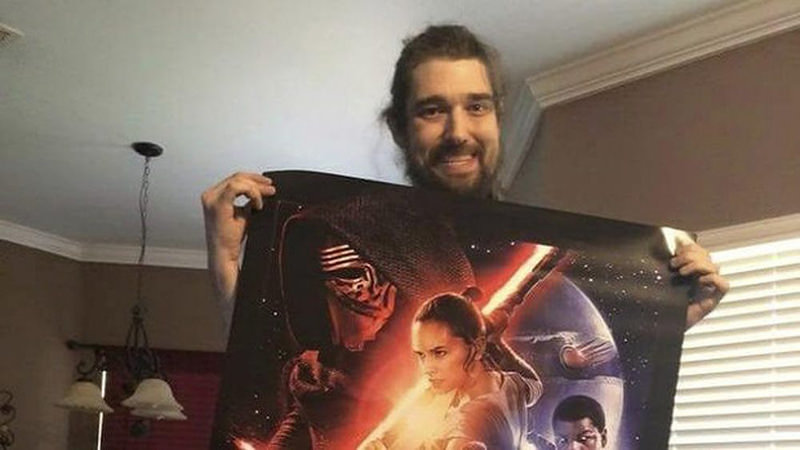 by reuters
Nov 12, 2015 12:00 am
The terminally ill Texas man and "Star Wars" fan who was granted his dying wish to see the new "The Force Awakens" film before it comes out in theaters has died, just a few days after viewing the movie, the man's wife said in a Facebook post on Tuesday.

Daniel Fleetwood, 31 and afflicted with a form of cancer that spread to 90 percent of his lungs, was able to watch an early cut of the highly anticipated new "Star Wars" film, due in theaters on Dec. 18, his wife Ashley Fleetwood said on Facebook last week. "Daniel put up an amazing fight to the very end. He is now one with God and with the force. He passed in his sleep and in peace. He will always be my idol and my hero," she wrote on Facebook on Tuesday.

Hamill tweeted last Thursday that he was "elated" that Fleetwood had been able to see the film.

On Tuesday, the hashtag was used to convey condolences. "This is when social media is used for good. You are now one with the force. Rest in peace sir," Brent Lindeque of South Africa wrote in a Twitter message.

Fleetwood and his wife, who reside in suburban Houston, had been documenting his health on social media, and in September he posted an update saying he had been given one or two months to live, due to how fast the cancer had spread. Disney said last Thursday that the screening for Fleetwood had taken place and that "all involved were happy to be able to make it happen." The company did not say where the screening took place, but given Fleetwood's poor health, it is likely to have been at his home.

The plot of "The Force Awakens," the seventh film installment in George Lucas's widely popular "Star Wars" universe that will see the return of franchise veterans Hamill, Harrison Ford, Carrie Fisher and Mayhew, has been kept tightly under wraps. Presales for the opening of "The Force Awakens" in theaters have already broken U.S. and international records.