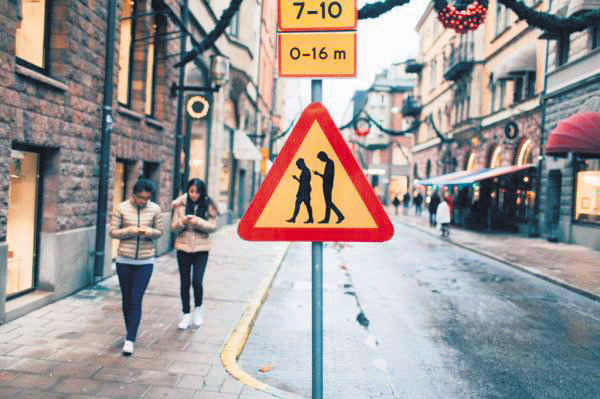 by Daily Sabah Nov 19, 2015 12:00 am
Jacop Sempler, a Swedish artist in Stockholm, designed a traffic sign to criticize smartphone obsession after he was nearly hit by a car while he attempting to send a message, the United Press International (UPI) news agency reported. Showing a couple pedestrians looking down at their smartphones, the traffic sign calls people to keep their heads out of their phones and on road. Sempler, 29, is a smartphone addict, but realized that his could lead him to an accident.

"One day on my way to work I was almost run over because I was staring at my phone like a sick person," he told Swedish newspaper The Local. "It hit me then that I'm not the only one with this behavior and that it ought to be addressed somehow," he said. Sempler and Emil Tiisman have placed the traffic signs in various locations around Sweden. The signs draw the attention of passersby who have shared them on social media platforms.
RELATED TOPICS