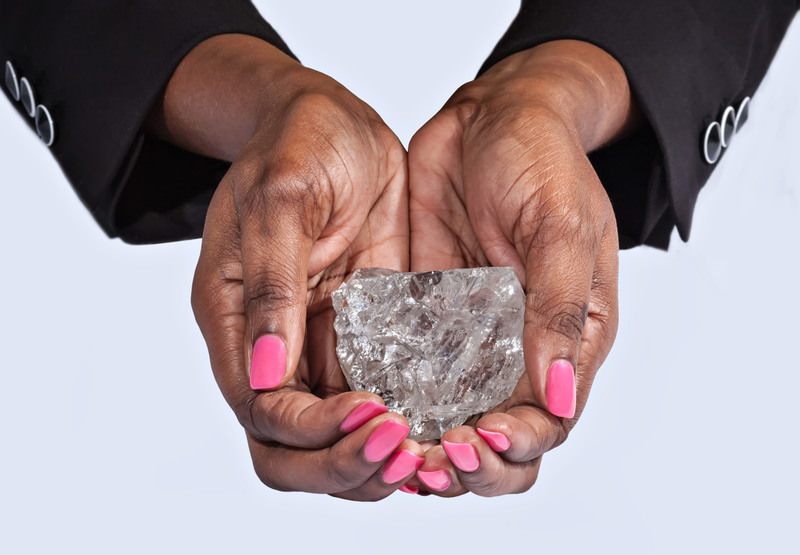 The stone measures 65mm x 56mm x 40mm in size and is the largest ever to be recovered in Botswana. (AA Photo)
by German Press Agency - DPA
Nov 19, 2015 12:00 am
The world's second-largest gem-quality diamond has been discovered in Botswana, the Canadian company Lucara said Thursday, with experts saying it was too early to estimate its value.

The 1,111-carat diamond is second in size only to the 3,106-carat one unearthed at the Cullinan mine in neighbouring South Africa in 1905, which was cut into the British crown jewels.

The diamond, slightly smaller than a tennis ball, was recovered by machines in the Karowe mine in central Botswana.

"I'm truly at a loss for words. ... We are truly blessed by this amazing asset," Lucara CEO William Lamb said in a press release.

"Our focus on mining the south lobe ... has been perfectly timed with the commissioning of our recent plant modifications, enabling the recovery of ... large, high-quality exceptional diamonds," he said.

An expert in the Belgian city of Antwerp, one of the world's main diamond trading centres, said the diamond was "of exceptional quality."

"A diamond half that size was sold for 35 million dollars recently," said Christopher Gemerchak from the Antwerp Diamond Jewellers Association.

The historic significance of the Botswana diamond as the world's second-largest makes it difficult to evaluate how much buyers might pay for it, he told dpa by telephone.

The value of the diamond also depends on factors such as possible cracks or dark spots, which need to be evaluated, he added.

Too large to be used as such, the diamond is likely to be cut up into a 200-carat "core diamond" and other smaller ones, Gemerchak said.

That decision will be taken by the buyer, the diamond polisher and designer, he added.

Botswana is one of Africa's top diamond producers, with diamonds making up about 80 per cent of its export income.
Last Update: Nov 19, 2015 8:36 pm