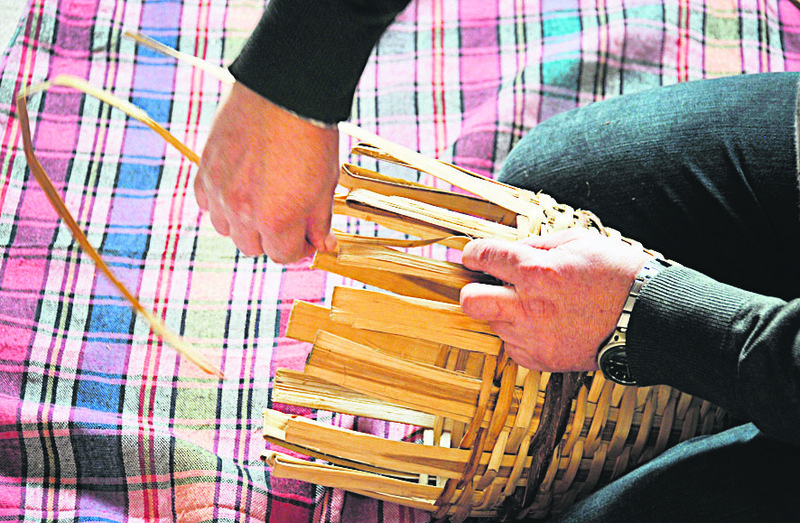 by Anadolu Agency Nov 26, 2015 12:00 am
Muharrem Uzun, 50, is the last living maker of the Karamürsel basket which is renowned for its historic roots in Turkish history. The Ottoman Sultan Abdülaziz was served cherries in one of these baskets, which were made in the northeastern district of Karamürsel. The craftsmanship of this basket is kept alive thanks to the efforts of Uzun, who continues to weave these baskets in his small workshop.

The Karamürsel basket, which is handcrafted using branches from the root of the chestnut tree, rivals plastic buckets and nylon bags. The basket was registered as a "geographical landmark" by the Turkish Patent Institute (TPE) in 2010, the result of initiated efforts by the Karamürsel Municipality.

Speaking to a reporter from the Anadolu Agency (AA), Uzun said that the Karamürsel basket is a durable, practical tool that is able to hold a lot of things despite its size. According to Uzun, the basket became famous during Sultan Abdülaziz's visit to the small town of Hereke in Kocaeli province, noting that its size and efficiency was the inspiration for a Turkish phrase that is still used today.

Uzun was encouraged to learn how to make the hand woven basket about 15 years ago by the mayor of the Karamürsel Municipality and is currently the only master of this craft in the district. "15 years ago, the mayor wanted to initiate a project to preserve this craftsmanship. Back then, there was a man named Hasan who made the Karamürsel baskets. Being from the same village as Hasan, I was chosen to be trained as a Karamürsel basket maker. When Hasan passed away, I become the only living basket maker," Uzun said.

Uzun is saddened that young people are not interested in basket craftsmanship, worrying that there will be no one to continue making this woven piece of history once he passes away. "I will continue to make the Karamürsel basket as long as I am breathing," Uzun said.

He said that there used to be at least five Karamürsel baskets in every home when he was a child. "The people of Karamürsel used to grow plums, cherries and olives. When they picked the fresh fruits, they put them into the Karamürsel baskets and sent them to Istanbul," Uzun said. According to him, the small handful of farmers left in the district who still harvest fruits prefer the use of plastics buckets, leaving the Karamürsel basket to be forgotten.

Uzun also notes that one of the most important reasons for the decrease in the number of basket masters is that it is illegal to cut down the chestnut tree. "The raw material used to make the Karamürsel basket is the chestnut tree; however, it is hard to find," he added.

The basket makers only use knives while making Karamürsel basket. A chestnut branch is divided into five pieces and each piece is then used. As it is hard to prepare the materials used in basket weaving, it takes one entire day to complete a single basket. Although Uzun does not earn significant money with his craft, he continues to make the baskets every day to keep the craftsmanship alive. "I work all day but I can only sell one basket for TL 40," said Uzun.

He goes on to note that the basket's durability can withstand 30 years of use, unless it is left in the mud. Uzun said that wooden baskets usually decay on the inside when they are exposed to water; however, the Karamürsel basket becomes stronger each time it contacts water.

Mehmet Ali Koygun has been involved in the Karamürsel basket trade for 45 years. He told an AA reporter that the district of Karamürsel is not only famous for the basket, but also for its fruits that have been grown in the district and sent to Istanbul with these baskets for many years.

The basket's popularity has declined in recent years, as people prefer the use of plastic buckets. However, historical TV dramas and films have revived the basket's popularity again. "Our baskets have been featured in 13 historical TV dramas which brought a slight increase in our sales. We currently sell 200 baskets every year. When fruit productivity is low, our basket sales drop as well," said Koygun. He noted that several projects are currently in the works, to increase basket sales.
Last Update: Nov 26, 2015 1:15 am
RELATED TOPICS