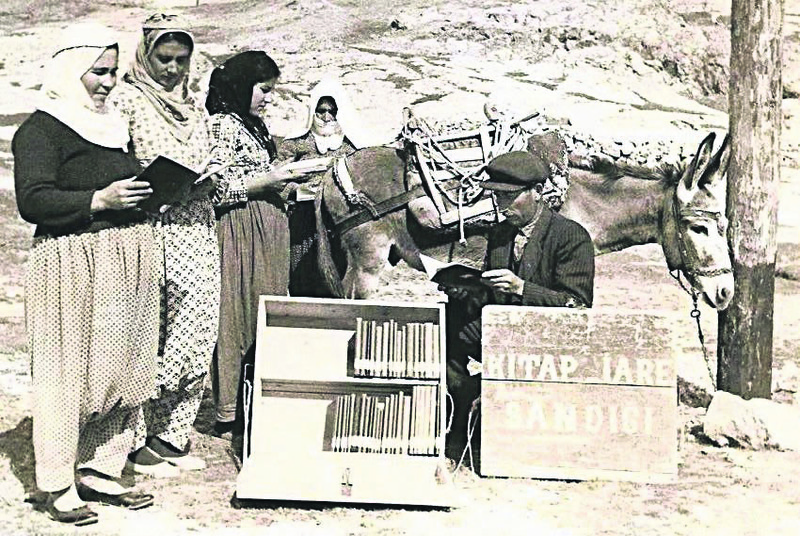 by Anadolu Agency Dec 07, 2015 12:00 am
The children of Mustafa Güzelgöz, who gained fame in Nevşehir's Ürgüp district after he traveled from village to village with his mobile library on his donkey in the 1940s, have established a museum to honor their father's memory. Aziz and Muammer Güzelgöz have been undertaking a reading campaign in the name of their father and they believe that they will be able to make their father's name live forever with the newly established museum. Speaking to Anadolu Agency, Muammer Güzelgöz said his father, who was known as "the librarian with his donkey," passed away in 2005. The Güzelgöz siblings converted their father's house into a museum, however, they needed support from the Culture and Tourism Ministry in order to overcome deficiencies and set an example for future generations. Güzelgöz said he worked as a director of the library for years. "I want students of literature, history and geography to visit this library," said Güzelgöz. "We are already welcoming university students. Those who come to our museum will be able to see the objects that my father used for his reading campaign. We are also displaying a sewing machine. When no one came to his house to read books, my father set up a sewing machine. Women who came to sew had no choice but to read while waiting in line." The museum also displays articles from newspapers about Mustafa Güzelgöz, various photographs and correspondence Güzelgöz had with people who supported his campaign from abroad. Muammer Güzelgöz hopes that these materials will encourage people to read books and show respect to literature.

"All we want is to inspire people with my father's work and make his name known by everyone. A sculpture of my father is being displayed at the campus of a private university in Istanbul. The Kartal Municipality also made a sculpture of my father that will be inaugurated in the near future," said Güzelgöz. He said they want to erect a sculpture of their father in front of the Ürgüp Tahsin Ağa Library as well.

Born in 1921, Güzelgöz was assigned to Ürgüp Tahsin Ağa Library by Ürgüp's district head in 1940 in exchange for promising to train the football team of Ürgüp's youth. Although he had no previous experience in being a librarian, Güzelgöz collected books from people and unearthed old books in order to establish a modern library in his district. When he realized that people living in the villages could not visit the library, he placed a box full of books on a donkey and visited 36 villages to encourage people to read. Known as "the librarian with a donkey," Güzelgöz's life and works are featured in many books and dissertations about library science.
RELATED TOPICS