Cinema hall for the blind in Istanbul overcomes visual obstacles 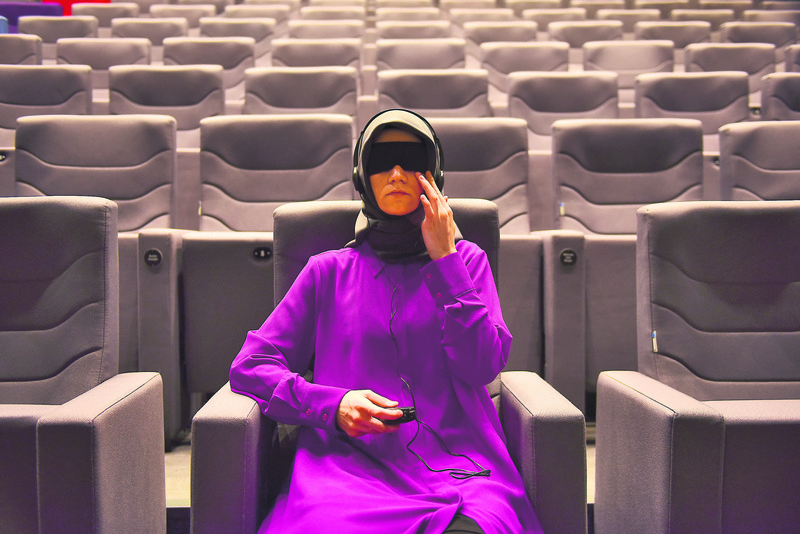 Wondering how a blind person can watch a movie, we attended the first screening of an audio-described film at Boğaziçi University's SineBu Theater, the first unimpeded theater with the required infrastructure in Turkey

I was in the dark. I took small steps, while at the same time grabbing left, right and center with my hands. I was all ears, trying to hear every little sound. I was worried that I would run into something. I could not think of anything else but hitting something or falling. But I had to walk through the darkness. In the darkness, touching meant seeing and sounds mean directions. So I was trying to move accordingly. I was in the SineBu Theater of Boğaziçi University, the very first unimpeded theater with the necessary infrastructure in Turkey. The most important characteristic of this theater is that it is the first theater screening audio-described films for the blind. The first audio-described film to be screened at the theater was "Abluka" (Frenzy). I was standing in front of the building to watch the film. I was wearing a blindfold to experience, even if for a brief moment, what the blind live through; to touch their lives, to experience unimpeded cinema. The guided walkways were my lifesavers as I was moving inside the building. Once I started touching these guided walkways with my feet and started following them, all my fears and worries were gone since they directed me about whether to move forward or make a turn. 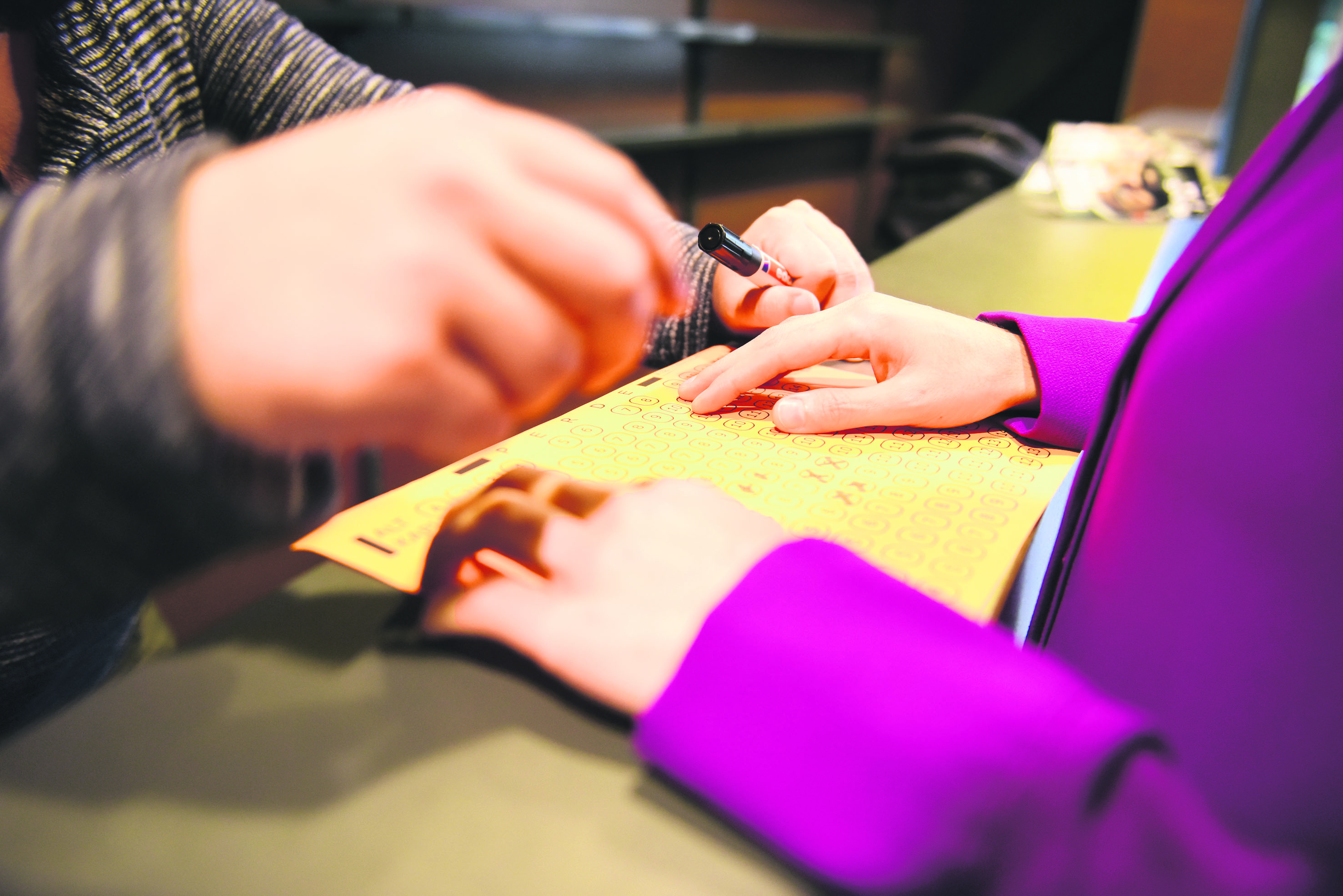 To enable visually impaired people to find their seats, letters and numbers printed in Braille placed at the beginning of each row. The teller of the cinema hall guides people to the cinema and hands them over their headphones in order for them to hear the descriptions about the film.

When I heard that two women just purchased a ticked for "Abluka," I realized that I had arrived at the ticket box. When it was my turn, the teller handed me a slip. He said, "You need to select a seat from the chart." I was puzzled as I did not think that it mattered where I was going to sit since I could not see the screen, let along anything else. Then, he said, "I will give you one of the seats in the middle so you can hear well." Then, my sense of touch stepped in and I allowed the teller to guide my hands with his. He described the shape of the theater to me while moving my hands over the seating chart. I was seeing through touch! He handed me the earphones and the device for the film and described how to use it. I started making my way to the hall after he said, "The entrance of the hall is right behind you." He also shouted and said that there were letters and numbers printed in Braille alphabet at the beginning of each row. I realized that I had entered the cinema hall as his voice suddenly became deep. I relaxed as I could touch the letters at the beginning of each row. I made my way to seat G6 through touch and popped myself in the seat and leaned back, delighted that the film would be starting soon. 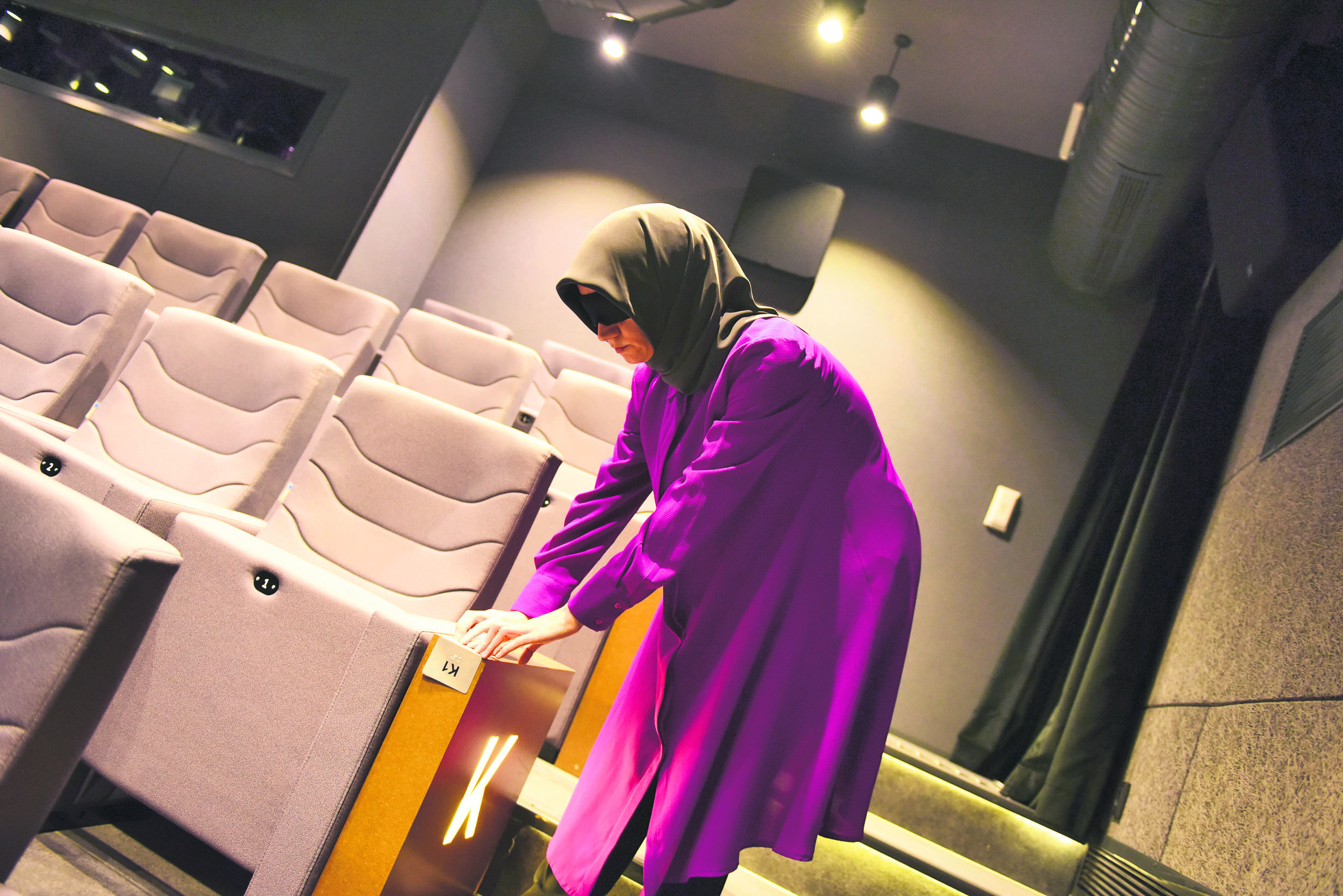 My ears were focused on the sounds around me; there was not a sound to be heard. I was washed over by a sudden feeling of loneliness. I wondered if I was in the cinema hall all alone. Then, I started hearing the sounds of footsteps on the stairs to my right and they did not seem to stop. Many people came. Were they young or old? Were they visually impaired or not? I was extremely curious about who was around me and what the hall looked like. I then overheard the youngsters whispering in the seats behind me. The male voice said to his friend, "It's a very nice hall." I felt uplifted since now I knew I was watching a movie in a nice movie hall. The murmurs increased, whispers got louder. I believed that we were about 60 to 70 people. Even though I did not know who was there with me, I was glad the hall was full.

Suddenly, a loud sound echoed in the hall. I became anxious. "Has the film already started?" I asked myself. Then, I heard the audio-description through my earphones. The description of the character Kadir: "….a giant man in his forties…," "woke up to the tremors…" Then, when the audio description said that the screen showed the name of the film, I was confused no more, "The film has really started!" I assured myself. 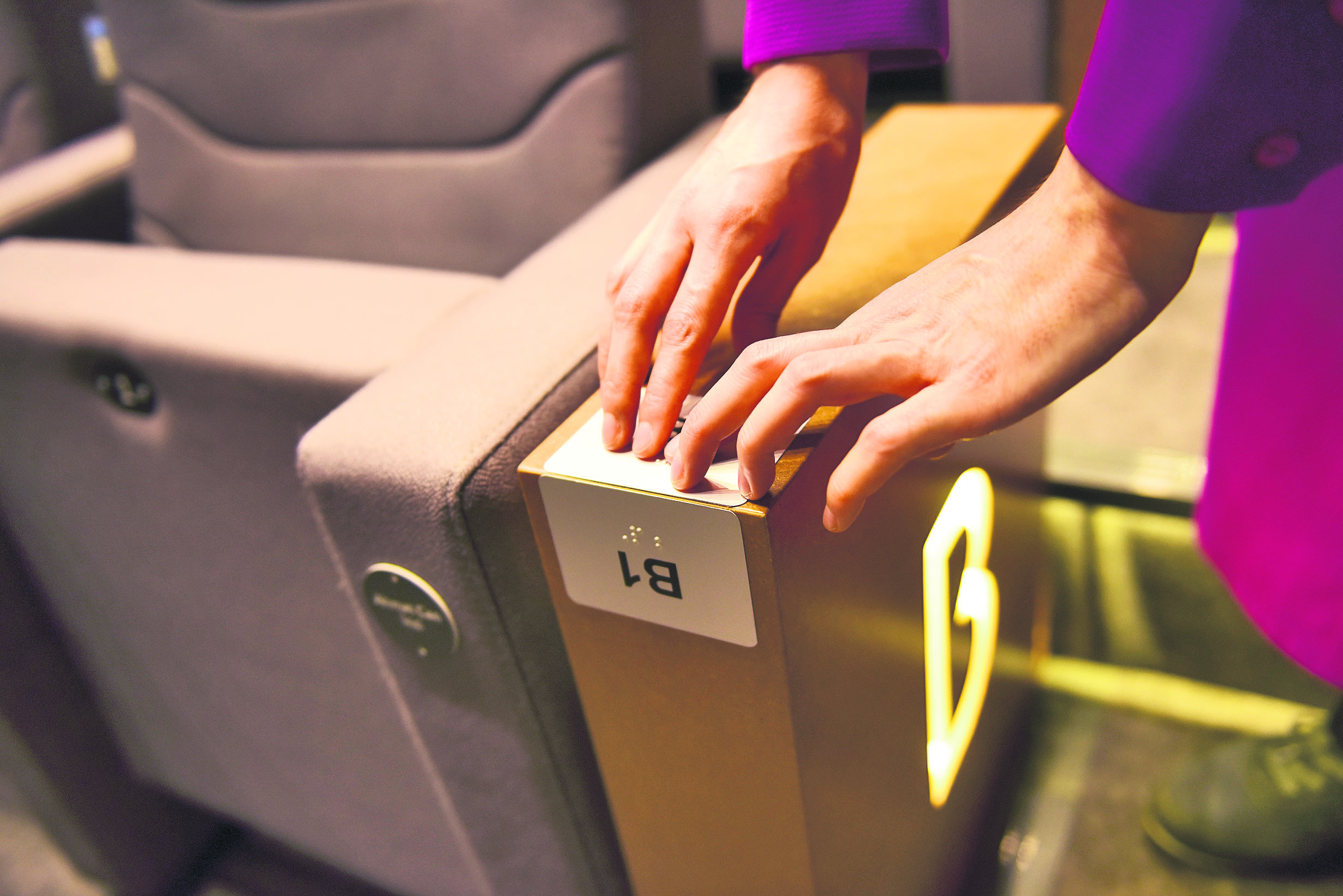 At first, I had a hard time concentrating on the film. Then, my imagination stepped in due to the lineless descriptions of scenes; I started creating the houses, the streets and characters in my head according to the cues I was given. I dreamed of dark, secluded, run-down buildings. The descriptions of the facial expressions were useful. You can understand whether the character is sly or thoughtful or is in between laughing and not. I could also follow the flow of events; the plot. However, I was not sure about which era the film was set in. I thought the story took place in the 1990s. Although I had a clear image of many of the characters, Meral somehow remained unclear, yet I somewhat envisaged her when they were describing the scenes. I got her now! I heard giggles coming from all around me in one of the scenes involving a dog. Although I've listened to the descriptions and heard the dialogues, I was not sure what they were laughing at. The question, "What did I miss?" was preying on my mind. I could not laugh! 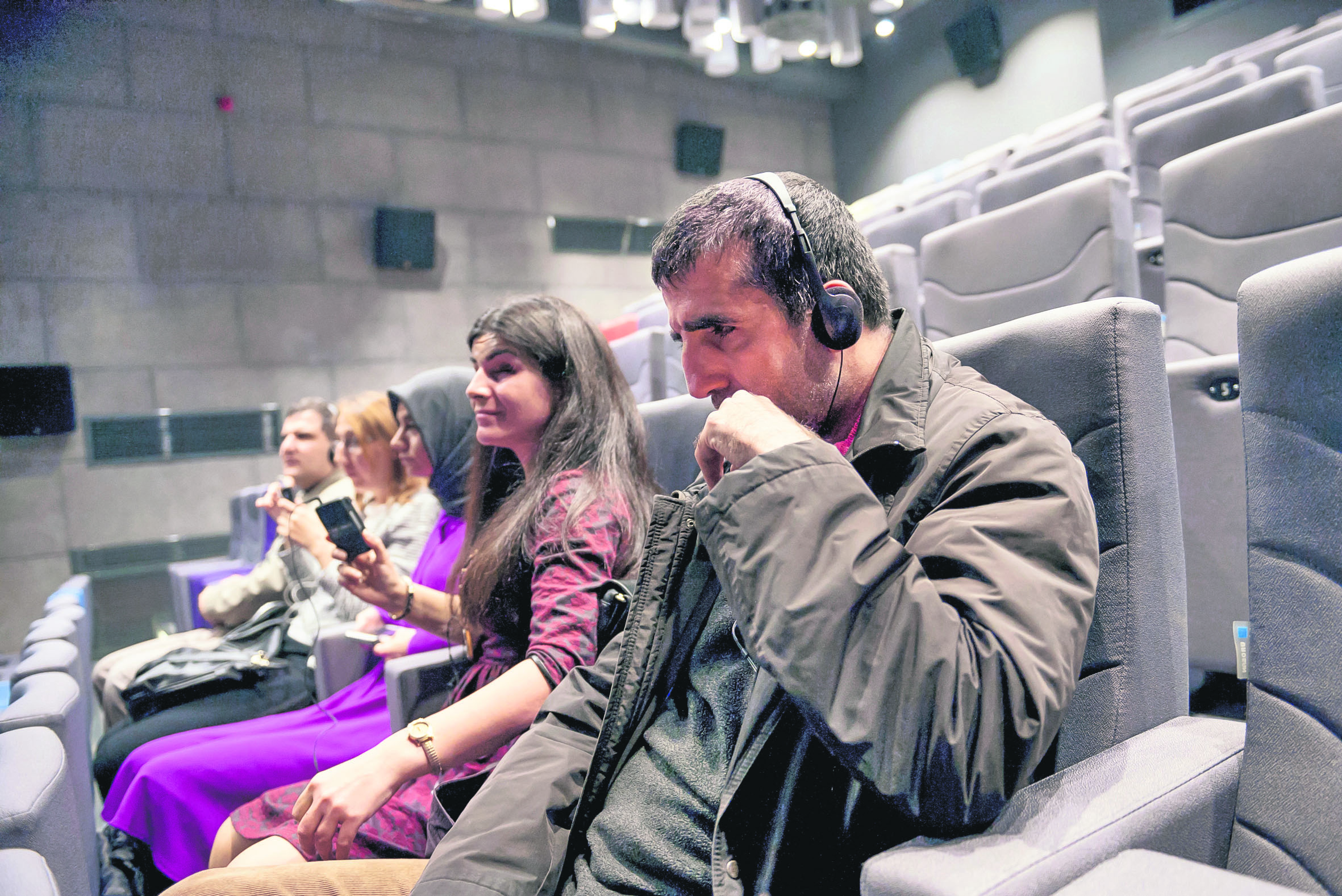 In action scenes, the dubber added thrill to his voice; thus, making these scenes, which had no lines, exciting. In these tense scenes, the dubber spoke faster so I felt both fear and tension at the same time. The feelings of curiosity and sadness were also there, in the dubbing. I was not going to go into the details about the movie but to say the least, I was scared to death at the sound of every gun shot. Yet, the dialogues in the film never conflicted with the audio-description. For example, when the description described someone as "with teary eyes and innocent look," and then, the dialogue entered, these became somewhat complementary, following each other. When the film ended, the audio-description also read the names of those who put time and effort into the film. I headed toward the ticket office to hand back the device and asked him how many people watched the film. "Twenty-nine," he said. I was baffled! I followed the guided walkway and left the building.

I visited SineBu to watch the same film once again but this time I did not wear a blindfold. I was with visually-impaired Levent Açlan, Mürşide Ciğerlioğlu, Sevda Yılmaz, the director of the Assistive Technology and Education Laboratory for Individuals with Visual Disabilities (GETEM). We entered the hall together; they found their seats using Braille alphabet. We were sitting side by side. When the film trailers started Ciğerlioğlu said, "Why don't they add audio-descriptions to these trailers as well." Then, they handed me the earphones and started watching the film. Now I was both watching and hearing the film and could empathize with the blind. Some of the scenes I pictured in my head were exactly in front of my eyes now. However, there was again something wrong with the character Meral. I guess I fixated on her whether blindfolded or not. She is not like anything I imagined. And I thought the house was more run-down than it looked.

After the film, the criticism started. Some liked it and some said, "Without the audio-description, it would be a waste of time." When I tell them that I watched it blindfolded the day before, Mr. Engin said, "It probably sounded more chaotic to you, it is hard, it probably makes more sense for us." Then, Yılmaz added, "Making films with audio-descriptions should not be a social responsibility but a social obligation. Ciğerlioğlu said that there should be more unimpeded theaters while Mr. Engin highlighted the importance of watching films together as equal individuals. What they all want from the authorities is to ensure that when an application for a film is submitted, it should be an obligation for it to have an audio-description as well. They said goodbye by saying "It is possible for the blind to watch films!"
Last Update: Dec 08, 2015 2:25 am
RELATED TOPICS