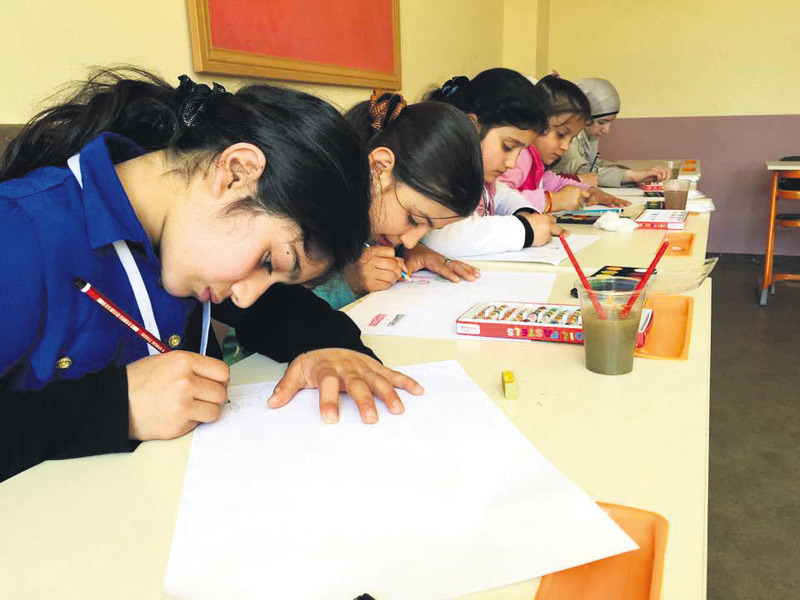 The brainchild of the 16-year-old Emir Özsüer, who wanted to do something for the displaced Syrian refugee children in camps and those trying to carve a life for themselves in Istanbul, Project Lift is a foundation that provides creative arts therapy to displaced urban children refugees, teaching them the coping skills to overcome trauma and adjust to their new lives away from home. It all started in 2014 when Emir paid a visit to the Nizip refugee camp in Gaziantep when he returned to propose his project idea to his mother Esra Özsüer, now president of Project Lift. Joined by a skilled team of Turkish and expat therapists, Project Lift now offers five-day intensive workshops in art, music, movement and dance therapy.

I had the opportunity to speak with Leyla Akça, an art therapist and chief advisor on all of the therapy-based activities Project Lift embarks on. Having lived in the United States for a decade where she received a creative arts therapy degree and certification in New York, Leyla was the perfect person for Emir and Esra to share their ideas with in the funding of Project Lift.

Explaining that although initially Emir wanted to help the Syrians in camps, he realized that it is actually the refugees in cities that need the most help. At camps, the refugees have a lot more services and opportunities, however the needs are different for those on the streets. So, they got together a ready team of creative arts therapists and embarked on offering therapy sessions to Syrian children, so many of which have suffered deep trauma.

What Project Lift does is once a month they hold a five-day intensive workshop with up to 60 Syrian children, which encompasses 15 sessions of art, music, movement and dance therapy. "These sessions are more focused on trauma and rehabilitation rather than being just an art class or music class, meaning we use a lot of directives that facilitate our teaching of coping skills. We are trying to help these kids learn skills such as problem solving, rebuilding social connections, understanding acceptable behavior and recognizing their emotions and knowing how to handle them. We want to give them healthy mechanisms and in a sense build them a toolbox, which they can take with them and reuse these skills when they face hardships in their lives," explains Leyla.

The team starts off by first meeting personally with the families in order to discuss and determine the needs of both parents and child. "This is an opportunity to assess how much schooling the child has received and if any," Leyla explains sharing, "This is because children who have had no schooling can have delayed motor skills or no experience expressing themselves creatively. Some have never held a pen; they have never had coloring paper and maybe have never even used scissors before. Many of these children were born into war and have never had the chance to go to school or at least in any sort of consistent manner," Leyla says.

The children range from ages six to 13 and are divided in three groups of 20 based on age, which rotate through different creative arts therapies including music, art and dance. "We put a cap at 60, because this way we can give the children individual attention. There are also three follow-up sessions held, which include socio-cultural visits to museums and a reading day to allow the children to polish their skills and give them a reminder to internalize what they have learned," says Leyla, adding, "We are seeing great results in the kids that really grow a lot in these 15-session five-day workshops, and we have received really positive feedback from the families."

These workshops are held in districts once a month. Project Lift's next intensive workshop will be held in the last week of January starting on Jan. 25 in Sultanbeyli, a district on the Asian side of Istanbul. I asked how they managed to get in contact with Syrian refugee children to which Leyla tells me that they work with local municipalities and NGOs who assist local refugee children. For example with the intensive coming up, the Sultanbeyli municipality provided the contact information for the Syrian children in need, explains Leyla, adding, "We have an ongoing relationship with the Sultanbeyli municipality, which has been quite proactive in terms of working with Syrian refugees and trying to provide them with the opportunities they need and one of these areas is ensuring these refugee children are getting an education, are adapting to integrating into our culture and to process their trauma and how to live with it. That's where we come in and have therefore been able to establish a good partnership."

There are seven main members of the team, including a combination of trained Turkish and expat creative arts therapists. Leyla Akça is an art therapist, Danny S. Lundmark is an American music therapist, Seda Güney is a dance movement therapist, while Australian native Jemmy Moody is a social worker who meets with the families, and Dena O'Connor, also hailing from the United States, is in charge of cross-cultural communication and international relations. There are also Syrian-Turkish translators on board. In addition, Project Lift has trained 200 volunteers in their two-day preliminary training program special geared towards providing skills to deal with trauma and how to effectively communicate with the children.Danny S. Lundmark is a fellow expat who offers music therapy to the Syrian children that are part of Project Lift . Danny grew up in Los Angeles for the most part and received his degree in music therapy at the Berklee College of Music. Danny moved to Turkey in 2008 and has been offering music therapy to children and the disabled at a wide variety of venues, including hospitals and schools such as teaching blind, autistic and down syndrome children at the Düşler Akademisi (The Dream Academy) and schizophrenic adults at the Bakırköy Psychiatric Hospital.

Speaking with fellow California native Danny I asked him to tell me a little bit about the music therapy, he offers the disadvantaged children who have the fortunate opportunity to be a part of Project Lift. "In music therapy, I focus on helping the kids overcome the stress of wartime and show them that life is not all about war and there is a different way forward. I do stress relief exercises and try to push their creativity and also leadership activities so they can experience being a leader for themselves," explains Danny.

I asked Danny what sort of trauma he deals with in the children of Project Lift and he tells me, "Some of these kids are really in bad shape. They have come to Turkey with either just one parent or are missing siblings. A lot of the kids have lost relatives... it's quite hardcore actually," said Danny.

Turkey has taken on the brunt of the refugees in the Syrian crisis and many of the unfortunate displaced families are trying to pave their way in Turkey on their own in Istanbul and independent of camps housing refugees. Project Lift is truly an incredible organization offering much needed therapy for children who have been ripped away from their homeland and witnesses to atrocities. This organization is making and offering excellent progress to these children in need of much welcome assistance and social connections. To learn more about their inspirational project and to volunteer or donate, check out: http://www.project-lift.net
RELATED TOPICS