Celebrity marriages twice as likely to split, compared to everyone else 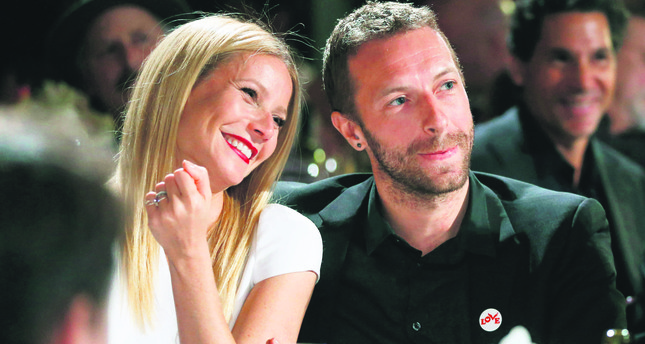 Gwyneth Paltrow (L) and Chris Martin
by daily sabah Jan 06, 2016 12:00 am
"I am home!" and "goodbye!" This is what celebrity couples experience in their marriages, as a new study has found they are twice as likely to divorce compared to the rest of us. The Marriage Foundation, a U.K.-based think tank, examined 488 celebrity couples who married between 2001 and 2010. The celebrity divorce rate over the first 14 years of marriage was 50 percent, the study found. Not surprisingly, the stress and tensions celebrities encounter lead to family breakdowns. "So, it would be reasonable to think that wealthy celebs would have the lowest rates of divorce. In fact, the reverse is true. Celebrities, as a group, divorce at roughly double the rate of us ordinary mortals," Harry Benson, the research director of the Marriage Foundation, said. Benson said celebrities are almost six times more likely to divorce than non-celebs.

The study looked at the marriages of Drew Barrymore and Tom Green, Eminem and Kim Mathers and Britney Spears and Jason Allen Alexander, none of whom made it to their first wedding anniversary. Britney Spears appears twice in the worst offenders charts following her three-year marriage to Kevin Federline that ended in 2007. Recently consciously uncoupled Gwyneth Paltrow and Chris Martin fare comparably well having stayed together 11 years, a feat shared by Charles Saatchi and Nigella Lawson.

At the top of the longevity list comes J. K. Rowling and Neil Murray, as well as Pierce Brosnan and Keely Shaye Smith, who have stayed together after 14 years of marriage. Sir Paul Coleridge, founder and chairman of the Marriage Foundation, said: "Celebs become, no doubt involuntarily, high profile role models. But this research shows that in their domestic lives, these people experience even more pain and suffering than us lesser mortals. And, in this respect, at least their lives are not to be copied or envied," adding that they are false icons who are subject to even greater pressures to separate. Many people look dazzled while watching their fairytale-like weddings. "And, behind too many of these high profile family breakdowns sits a set of confused and distressed children who have felt the two tectonic plates of their lives pulled apart under the full scrutiny of the media," Coleridge said, adding: "Children of celebrity families are the ones who suffer most from the breakdown."
RELATED TOPICS