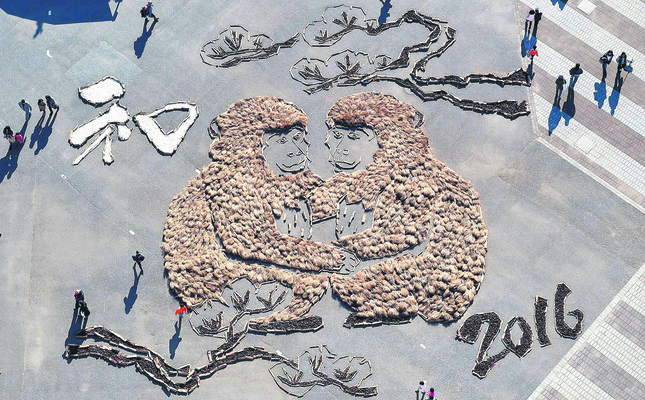 by Zeynep Esra İstanbullu Jan 13, 2016 12:00 am
According to the Chinese calendar, due to the year of the Fire Monkey, which repeats itself every 60 years, the world will experience similar things as it did in 1956. Accordingly, although there are foreseen positive developments in the economy in 2016, the world is not waiting for good news about natural disasters. According to the Chinese astrological calendar, the year 2016 is the year of the Fire Monkey. Feng Shui expert Esra Koyuncu says 2016 is showing green lights for the economy, however the expectations for dialogue between countries are not good.

During the Feng Shui Congress held in Shanghai, Esra Koyuncu, who became Turkey's first master Feng Shui expert, talked about the ancient Chinese teachings of Feng Shui and what we should expect in 2016. Koyuncu said that the Fire Monkey is a symbol of rebirth. She added the Chinese calendar is not only a tool to keep track of history, but says the Chinese calendar is also a great system to predict the future. The element of "fire" brings to mind energy, explosions and fires. Koyuncu said that the enumerated star "monkey" could pave the way for travel for many people in 2016.

"The element of fire brings energy of happiness," emphasized Esra Koyuncu. "Fire is optimistic. In the year of the fire, despite everything else, the feeling of confidence in people will increase. Optimism will increase the rate of spending money said Koyuncu, and this will lead to positive reflection in the economy," she stated.

During the year of the Fire Monkey 60 years ago, the agenda was filled with the nationalization of the Suez Canal, the English bombing of the Egyptians, Israel's invasion of the Sinai Peninsula, as well as the riots in Poland and Hungary against the Soviets, and the brutal ways in which they were suppressed caused tension between countries. "The fire, guns, explosions and so on caused by Metal are cooled down by Fire. According to the ancient Chinese teachings of Feng Shui, Fire is known for warming up the hearts of people and giving happiness. The bad events that metal creates will be prevented from getting out of hand by fire," said Koyuncu.
RELATED TOPICS