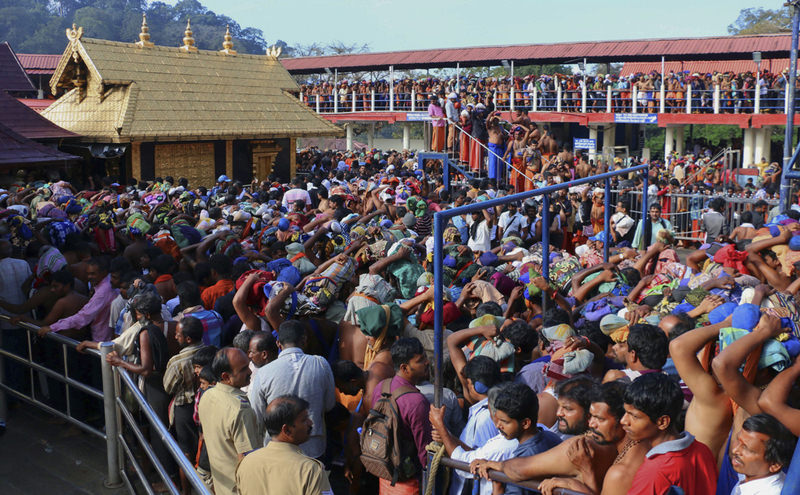 by Associated Press Jan 16, 2016 12:00 am
Millions of Hindu men trudge the steep, three-hour climb to a hilltop temple to worship a celibate god every year. They bathe away their sins in the Pamba River. And these days, they leave less of a trace thanks to new rules aimed at getting rid of plastic trash.

Local officials have banned all plastic containers from the Sabarimala temple, set deep in the dense jungle of tiger conservation park in Kerala state. Pilgrimages throughout the year attract some 100 million worshippers, though women of childbearing age are forbidden from entering.

For years the traffic took a heavy toll. Pastures were strewn with potato chip packages and water bottles. Plastic bags blown into the air caught on branches and hung from the forest canopy. Rivers became choked with clothing discarded as people as they wash away their sins. Last year, traces of plastic were found in the digestive tracts of dead samba deer and at least one elephant, prompting Kerala's forest department to petition a court last year for the ban on disposable plastic items.

Such bans have been imposed in various parts of India, including the capital of New Delhi, with little effect as people flout new rules and authorities do little to crack down. The famed Himalayan pilgrimage to the Amarnath stalagmite housed in a cave atop a mountain has become well known for the trash left on the mountain trail.

But visitors and officials in Sabarimala say there is already a noticeable difference here.

Pilgrims readily hand over their plastic bags and bottles, about 90 percent of which is recycled and the rest incinerated. District workers collected 1.2 tons of plastic trash this year from busloads of visitors during the latest pilgrimage, which ended Friday and drew some 5 million people.

"There is a palpable change," says pilgrim Dinoj D., who has made the annual visit every year for the past 10 from his home in the neighboring state of Karnataka. "It was becoming the need of the hour for an anti-plastic drive here."

Still, there is room for improvement, and officials may start frisking pilgrims for plastic next year rather than relying on them to voluntarily give it up. "We aim to extend the mission further, to possibly also include fines, among other things," Pathanamthitta district magistrate S. Harikishore said. While acknowledging that people traveling for days need to carry and store things, he suggested they use cloth bags or reusable containers that are not thrown away.

The government has spent nearly $18 million since November handing out cloth totes, setting up plastic trash receptacles and printing leaflets for an awareness campaign, Harikishore said. Aiming to cut down on the 2 million or so plastic bottles usually left behind, officials have also set up a free water filtration depot for people to refill flasks. Clean up crews have also collected one-third the amount of discarded clothing from rivers than what they pick up after last year's pilgrimage. The Sabarimala shrine is dedicated to Lord Ayyappan, and is believed to mark the spot where the Hindu god meditated after killing a powerful demon. More temples sit atop other hills surrounding Sabarimala.
RELATED TOPICS