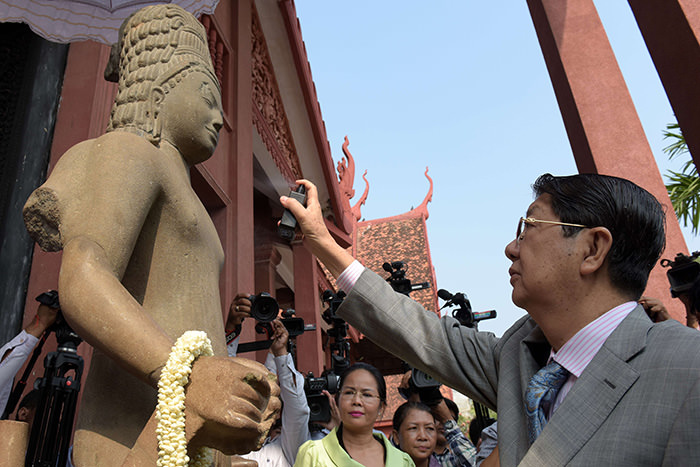 by Associated Press Jan 21, 2016 12:00 am
The head of a 7th century statue of a Hindu deity was returned by France and reattached to its body Thursday for display at a Cambodian museum, more than 130 years after it was spirited away.

The stone sculpture depicts Harihara, a deity that combines aspects of Vishnu and Shiva, the most important gods in the Hindu pantheon who represent the creation of the universe and its destruction. It was taken from the Phnom Da temple in southern Takeo province by French researchers in 1882 or 1883 and was displayed at France's Guimet Museum.

About 200 government officials, representatives of foreign governments, ambassadors and officials from the Guimet Museum attended the ceremony to reattach the head at the National Museum.

"After it was separated 130 years ago, we are welcoming the reunification of the head and the torso of Harihara," Deputy Prime Minister Sok An said at the ceremony. "According to our Khmer culture, the reunion is symbolic of prosperity."

He appealed to other countries that hold Cambodian artifacts to return them.

A 1993 Cambodian law prohibits the removal of cultural artifacts without government permission. Pieces taken after that date have stronger legal standing to compel their owners abroad to return them. But there is also general agreement in the art world that pieces are deemed to be acquired illegitimately if they were exported without clear and valid documentation after 1970 the year of a United Nations cultural agreement targeting trafficking in antiquities.

In October, Cambodia welcomed the return of two stone statues from the Angkor period that were looted during the country's civil war and taken to Europe, where they spent the past three decades. The sculptures a 9th century head of Shiva and a late 12th to early 13th century male divinity head were formally handed over by Norwegian collector Morten Bosterud.

Also in June 2014, three 1,000-year-old statues depicting Hindu mythology were brought back to Cambodia. They were also looted from a temple and put in Western art collections.

Cambodia was ruled by Hindu kings for centuries, and it was the main religion of the country before Buddhism took over. More than 90 percent of Cambodians today are Buddhists.
Last Update: Jan 22, 2016 12:08 am
RELATED TOPICS