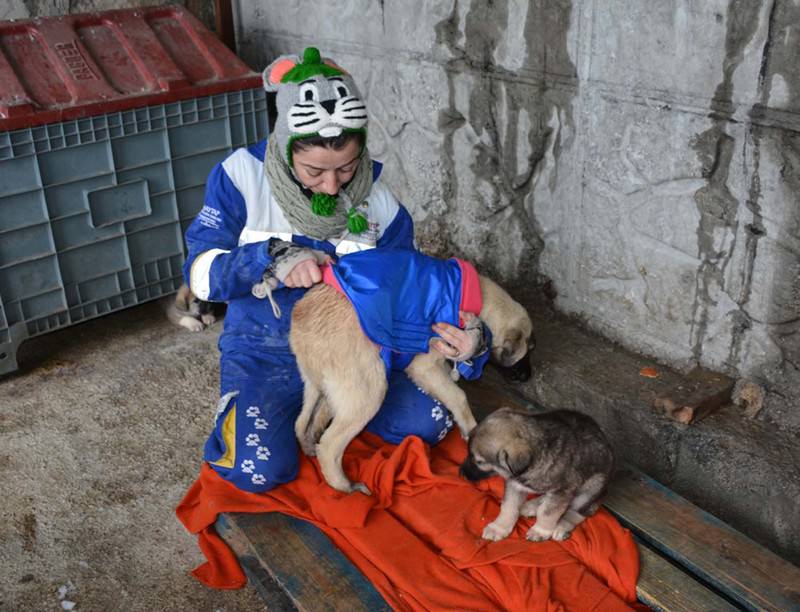 by Daily Sabah with Agencies Jan 23, 2016 12:00 am
Turkey has been grappling with cold weather and snowfall lately, encouraging residents and expats to take care of homeless animals that are suffering from the frigid weather. Cats and dogs can only survive a maximum of three days in the freezing temperatures, according to veterinarians.

Sabina Herriger, a 60-year-old German woman, delivered clothes to an animal shelter in the eastern province of Bitlis, where temperatures have fallen to minus 20 degrees Celsius. Upon learning of the weather conditions in Turkey, Herriger travelled to Bitlis and outfitted dogs the protective clothing she designed herself. With the help of the Animal Rights Federation (HAYTAP), she brought waterproof, polar clothes to Turkey.

Damla Şahin, the Bitlis representative for HAYTAP, said that the cold weather and snowfall poses a health threat to both humans and animals. In the district of Tatvan as well as downtown Bitlis, the most vulnerable dogs - baby pups, older dogs and those suffering from disease - have been outfitted.

Veterinarian Ömer Atış said, "Animals cannot find shelters or food in the cold weather. We are exhausting our efforts to provide them with food. I ask everyone to be sensitive to this issue."

Another campaign for animals is ongoing in Istanbul. The "Bana Göz Kulak Ol Duyarlı Yaşam" Association, (Watch over me susceptible living), which was founded primarily by well-known celebrities, aims to encourage people to adopt animals from shelters rather than buying them from pet shops. They have launched a campaign titled, "Satın Alma Sahiplen" (Rescue, don't buy). With schools on mid-term winter break and Valentine's Day just around the corner on Feb. 14, pet shops expect an increase of customers; therefore, the campaign intends to dissuade people from buying pets from stores. The campaign is calling on people to adopt pets from animal shelters rather than buying them from pet shop owners.