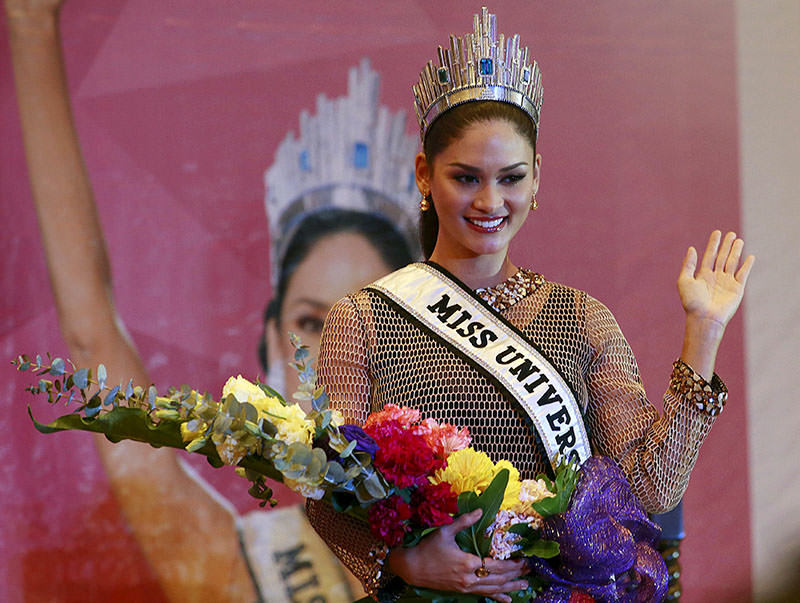 Miss Universe 2015 Pia Wurtzbach waves during a news conference at a hotel in Quezon city, metro Manila January 24, 2016, after her return to the Philippines (Reuters)
by German Press Agency - DPA Jan 24, 2016 12:00 am
Miss Universe Pia Wurtzbach described Sunday the 300,000-dollar diamond-encrusted crown as her "boyfriend now."

The Filipina-German beauty queen said she was so proud to have won the 2015 title that she slept with the crown beside her in bed in New York.

"For the first few days I was in New York, I would open the box to check if it was still there," the 26-year-old told a press conference in Manila.

"I don't know if the other girls have done this, but has anybody actually slept with the crown beside them? So that's what I did. I took a nap beside it with me."

Harvey corrected himself after Gutierrez was crowned.

Wurtzbach is the third Filipino to win Miss Universe, after Gloria Diaz in 1969 and Margie Moran in 1973.

"To be back here now with the crown is the happy ever after that I've been dreaming of for a lifetime," she said. "It's not just my dream, but it's the dream of every Filipino. I'm so proud, I'm so happy."

Wurtzbach will attend a parade and meet President Benigno Aquino and other government officials on Monday. She will also attend a charity event during her week-long trip.
Last Update: Jan 24, 2016 1:46 pm
RELATED TOPICS