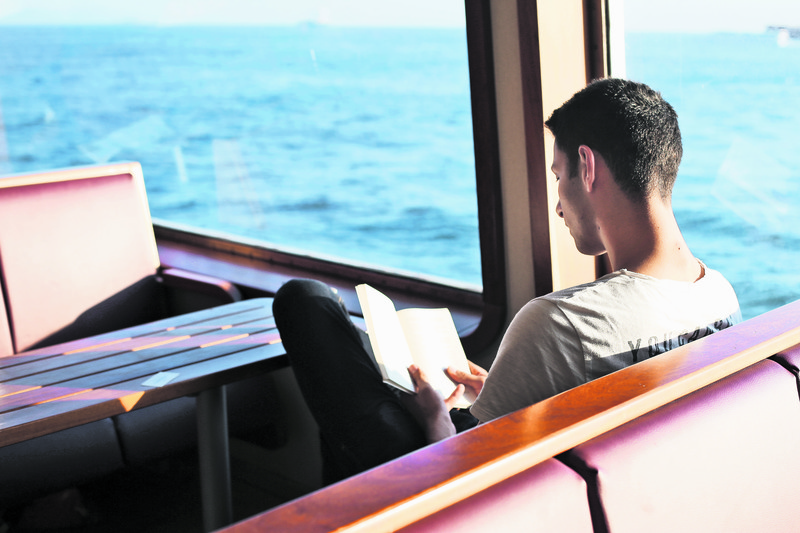 According to the İETT's 2014 statistics, Istanbulites spend about 100 minutes a day on public transit. The team of Istanbul Okurken's team takes photos of readers on different forms of public transit. They not only remind people that reading books is a good way to pass the time on a metrobus or ferry, but also record who reads what, creating a visual book archive

It is no secret that public transportation can be a nightmare in Istanbul, especially during rush hour. Passengers making the long commute to work or home race to grab a seat on crowded trains, buses and minibuses. You may see travelers busy on their smartphones, listening to music or reading books while using public transit.

Every day, a total of 5.7 million people make 13.5 million trips using public transit in Istanbul, with roughly 40 percent of Istanbulites taking subways, metrobuses or ferries. These figures are given by the "Istanbul Okurken" (While Istanbul Reads) team which captured photos of passengers reading books or newspapers on public transit. "We believe that reading - whether printed books or on digital devices - to pass time on public transit in Istanbul is a good idea, and we photographed people doing just that, with their consent." Based on the 2014 statistics of the Istanbul Electricity Tram and Tunnel (İETT), the average duration of a trip by bus or metrobus in Istanbul is 32 minutes, with the average person living in the city spending about 100 minutes daily using public transit. Considering the lengthy daily commutes of Istanbulites, reading a book seems like the best alternative to wasting time on your cellphone.

Designed by three book lovers - Gizem Kendik, a project coordinatior at a nongovernmental organization (NGO), Didem Kendik, a photography and social media editor, and Deniz Cem Özduygu, a visual communication designer - "Istanbul Okurken" uses an active Instagram account to promote their cause: A project in which volunteering project participants capture photos of daily commuters using public transit as they read books to pass their time.

The team reads a lot on road and likes taking photographs; hence, "Istanbul Okurken" serves as a reminder for those who complain that they do not have enough time for reading. "We do not aim to glorify readers, compare them to those who choose to play games on smartphones or the like; nor are we endorsing the idea that 'everybody should read' [through] Istanbul Okurken. We are not romantics. We are just interested in people who read during the time they spend using the public transit system and photograph them," the team says on their website.

The project documents the daily routines of readers during the typical daily commute. So far, the group has taken photos of passengers on ferries, subways, metrobuses and on the Marmaray railway. They also have a specific photography process. After they come across a reader on public transport, they briefly talk about the project and get their permission before or after taking their photos. The readers are given a bookmark which has the project logo and contact info on it. In other words, if the readers change their minds or just want to take a look at the photos, they can easily contact the team. "Roughly 75 percent of the readers are okay with being photographed and 95 percent of [them] let us see [which book they are reading]," the team says. No specific poses are required but they ask commuters to simply continue reading. "Out of these 100 books, 57 of them were translated from their original language to Turkish, 39 of them were written in Turkish and four of them were in their original language other than Turkish. .... we have already come across readers enjoying books including 'Kuyucaklı Yusuf' by Sabahattin Ali, 'Just Kids' by Patti Smith and 'The Alchemist' by Paulo Coelho several times."

Istanbul Okurken will probably be more successful in the future as the photos uploaded on the website provides a makeshift booklist with Goodreads ratings. The project can also be a good source for Turkish readers' book choices. In an interview with the travel website Savoteur in Istanbul, the team says 75 out of 100 books they photographed are fiction novels and the rest were nonfiction.

Some commuters were seen reading Gabriel Garcia Marquez's "One Hundred Years of Solitude" on the metro, with one young girl reading "Hınzır Bilmeceler" (Wicked Riddles) on the Marmaray railway. Istanbul ferries are probably the best place to enjoy reading, though. In one photo taken for the project, a young man is seen wearing headphones while reading "Acısız Bilim" (The Naked Scientist) on a ferry, while another man falls asleep and the other man on the left side is busy with his phone. Each photo not only documents books but the very usual way of life of the Turkish people. In their interview, the team reports that the most comfortable transportation system in the city is the ferry. Maybe this is why they can have more sophisticated photo shoots via that transportation mode.

The team also receives requests from other people who have taken similar photos and want to share them. They first thought about embedding an Instagram feed on their website to display other people's photos but were faced with two main shortcomings. The team prioritizes the permission issue a lot and does not want to turn Istanbul Okurken into a "peeping tom." "So, we don't systematically include photos coming from other people in our main archive on the website, but will try to publish photos that we believe have no consent issues on our social media accounts," they say.

The team wants to add other public transportation modes to their list; namely, buses and tramways, in near future. They are planning to create a photo archive and release a book, which is one of their dreams. In the future they hope to expand their projects to other cities.
RELATED TOPICS