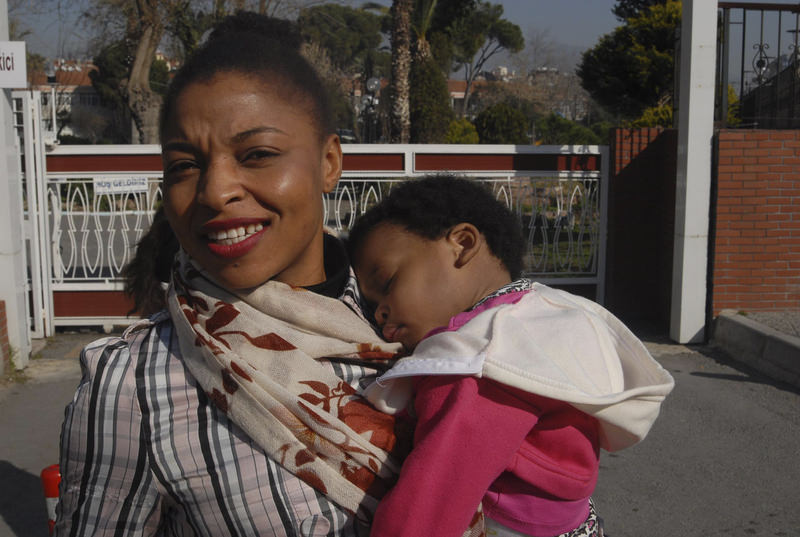 by Feb 01, 2016 12:00 am
Tamfu Nancy Nkeni arrived at İzmir after fleeing from her country, Cameroon, with a dream of reaching Europe for a better life. However, she got tuberculosis and passed away after giving birth to her baby girl Alima. After 17 months, Alima Kutsi is ready to start a new life with her family. Nkeni's father, Wilson Tamfu Gwei, has been struggling to win custody of his granddaughter for over a year and, finally, he has received the good news. Alima, who has been staying at a state nursery, has been given to her family. It has been reported that the little girl will initially be taken to Cameroon and then begin a new life in the U.S. after her aunt officially takes Alima's custody.

Nkeni met with tragedy as she tried to start a new life for herself. After illegally residing in several Far Eastern and African countries, Nkeni entered Turkey in 2013 with her passport. She was pregnant when she came to Turkey and made several attempts to go to Europe and then to the U.S., where her family lives. She had to reside in the Aegean city of İzmir after getting caught on her way to Greece along with other illegal immigrants.

Nkeni worked as a prostitute despite being pregnant to Alima due to financial difficulties. During her time in İzmir, she contracted HIV and tuberculosis as a result of the unhygienic and unhealthy living conditions. After giving birth to a little girl in August, 2014, at Tepecik Research Hospital, Nkeni was taken to a deportation center but was readmitted into the same hospital in December, 2014, as her diseases worsened. Because her immune system was crushed by the tuberculosis and HIV, she did not respond to treatment and passed away in January, 2015. She was buried in İzmir Paşaköprü Christian Cemetery without a ceremony, as her family did not have enough money to cover the expenses.

Upon the death of his daughter, Wilson Tamfu Gwei made an application to the related ministries to get custody of his granddaughter Alima, who was under the protection of the state. Meanwhile, Tenkeu Jean Jules, who showed up five months after the death of Nkeni, claimed that he was the father of Alima and filed a law suit to get the custody of his "daughter." After contacting the Honorary Consulate of Cameroon, the Ministry of Family and Social Policies decided to give custody of Alima to her grandfather.

After the custody process was finalized, grandfather Gwei took 17-month-old Alima Kutsi from the state nursery with his attorney Emine Sarı. Gwei said the little girl reminds him of his daughter Nkeni and that she is very dear to him, stating that he will do everything he can for Alima to receive a good education and maintain a good life in the future.

Alima was taken to the state nursery after losing her mother to tuberculosis and stayed there for 17 months. The little girl, who can barely walk, was very popular among the nursery staff. As she was being delivered to her family, the nursery staff was very emotional. Although Alima was sleeping when she was taken out of the nursey, her new life started as soon as she was given into the arms of her grandfather.

Alima's aunt, who is living in the U.S., will adopt the little girl after the adaptation process in Cameroon is over and take Alima with her to enjoy better living conditions and education. It has been also revealed that Alima was not exposed to HIV, although her mother was HIV positive during her pregnancy.
RELATED TOPICS