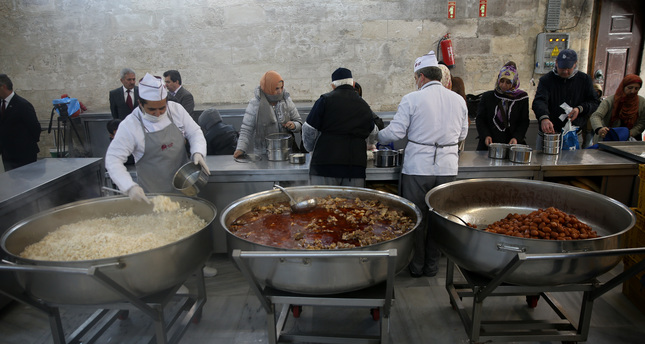 Founded in the late 18th century, the Mihrişah Valide Sultan Imaret is the only remaining public kitchen from the Ottoman era that still offers help to refugees, poor families and the homeless. Hot meals are served to almost 2,000 people everyday

Homelessness and the dire needs of displaced refugees have become serious topics in the winter months, as dozens of foundations and humanitarian groups increasing efforts to meet the increasing demand for food, accommodations and clothing. In addition to homeless shelters, public kitchens have opened in Istanbul. These kitchens, known as "imarets" during the Ottoman and Seljuk eras, used to be known as public kitchens intended to feed the poor, travelers and students. Certain almshouses also offered accommodation facilities. Closely associated with philanthropy, they were previously a part of the "Waqf," a large charitable complex including caravansaries, hospices and mosques. Meals in the public kitchens were free and all costs were met by the foundations established by wealthy people. Roughly 4,000 to 5,000 meals were served daily in Istanbul, with numbers increasing during religious holidays and special festivities.

Situated in Istanbul's Eyüp district, the Mihrişah Valide Sultan Imaret is the only remaining public kitchen from the Ottoman era that still helps people in need. Established in 1792, the public kitchen has been opening its doors to poor people for the past 224 years. Every day, hot meals are offered to nearly 2,000 people. Today, hundreds of Istanbul's youth and the elderly stand in long lines in front of the public kitchen waiting to be fed. The destitute come there with meal boxes and get food for their families before heading home. People can also take a seat and have their meal in the public kitchen. You can quickly see both the happiness and sorrow in the eyes of Istanbul's homeless as they wait for their food. Children evoke a sense of happiness, grateful to enjoy a home-cooked meal there.

The public kitchen was constructed with the commission of Mihrişah Valide Sultan, the wife of Ottoman Sultan Mustafa III and the mother of Sultan III. The place has since served as a public kitchen. Two course of food were served at the Ottoman-era almshouses. On the days during Ramadan and on Fridays, additional meal courses were available. Mürsel Sarı, a senior manager at the General Directorate of Istanbul Foundation, said that the Mihrişah Valide Sultan Imaret is a prioritized and registered historical artifact of Istanbul. "This is why we try to keep it alive. Meal distribution takes place each day from 10:00 a.m. to 4:00 p.m. Almost 100 locals living around the district come here to get food," he said. Upon request, food can be delivered to the homes of poor people by service vehicle. Syrian refugees also benefit from the public kitchen. Around 300 Syrian refugees get hot meals there per day. "We are trying to help people as much as we can. Locals donate Qurban meat - the meat Muslims sacrifice for Qurban Bayramı, [the Feast of Sacrifice]" he went on to say.

People who need to utilize the services offered at the public kitchen can submit an application and, after a short background check, can be put on the list of recipients.

There were a number of charitable endowments in the Ottoman period, all of which were important instruments of the empire's beneficiary policy. Public kitchens were mainly established by statesmen, viziers and sultanas. One of the first examples of a public kitchen was built by Orhan Ghazi, the second sultan of the Ottoman Empire in İznik. Based on certain historical accounts, almost 30,000 people used to

receive food from Istanbul's public kitchens toward the end of the 18th century. The largest public kitchens were available in Haghia Sophia, Beyazıt, Fatih, Süleymaniye, Nuruosmaniye, Laleli, Eyüp and Üsküdar. With the exception of the public kitchen in the district of Eyüp, all other imarets perished. Another good example of imaret was in Jerusalem, built upon the order of Hürrem Sultan, the wife of Sultan Süleyman I. Such establishments indicate the important role of imperial women as benefactors. Like public kitchens, darülacezeler (almshouses) have also helped the needy for years. More than just a shelter, the darülaceze situated in Istanbul's Okmeydanı neighborhood has a mosque, a synagogue and a church standing together in the same garden. Established in 1895, the darülaceze relies on donations and contributions, as well.
RELATED TOPICS