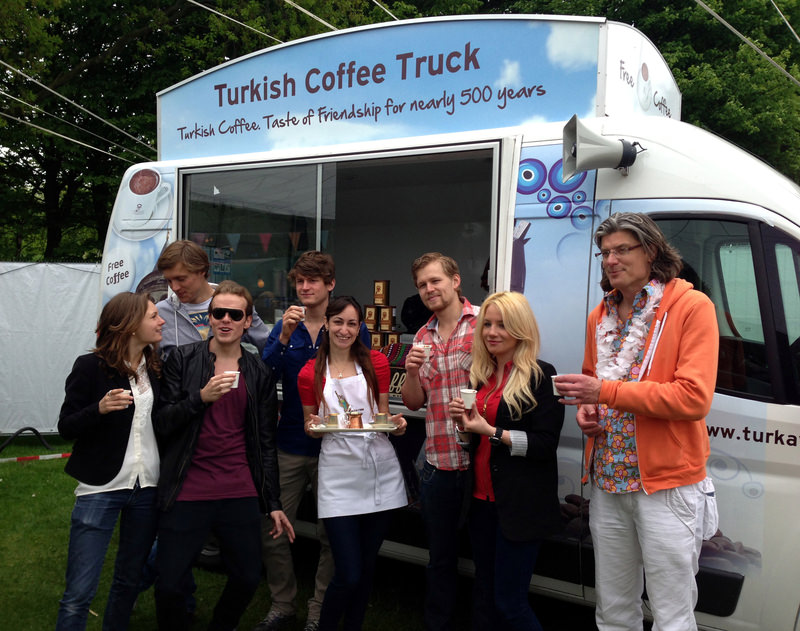 by Daily Sabah with AA Feb 03, 2016 12:00 am
The project "Turkish Coffee Truck" is a volunteer initiative that was launched to promote Turkish coffee culture across the United States. Launched in 2012, a group of volunteers traveled to five U.S. cities including Washington, D.C., Baltimore, Maryland, New York City, New Haven, Connecticut, and Boston, Massachusetts, to offer free, traditional Turkish coffee to the American people. The group also visits prestigious universities such as Harvard, Yale and George Washington University to meet students. Their goal is to spark interest in Turkish culture while enhancing the relations between the two nations.

Volunteer brand specialist and founder Gizem Şalcıgil told Anadolu Agency (AA) that the group also tours around Europe and offers Turkish coffee to everyone as per their motto: "Turkish Coffee: The Taste of Friendship for 500 years." The volunteers rent mobile food trucks and decorate them with colorful visual images representing Turkish culture. "With a team of 10 volunteers, we designed a road map and released an events calendar. After water, coffee is the second-most consumed beverage in the world. Europe and Western countries were introduced to coffee by Turks, and coffee has always remained an element that shapes social relations," Şalcıgil said.

The team also organized tours to the Netherlands, Belgium and France thanks to contributions from the Culture and Tourism Ministry. In the first-ever Turkish coffee tour in the U.S., 10,000 Americans enjoyed Turkish coffee. The project received domestic and international media coverage as well as official recognition from the governor of Maryland, the mayor of Washington, D.C., the consulate general of Turkey in New York and the U.S. House of Representatives. The project is mainly funded by donations from Turkey's oldest ground coffee seller, Kurukahveci Mehmet Efendi. The team is planning to expand its tours to China, South Korea and Singapore.
RELATED TOPICS