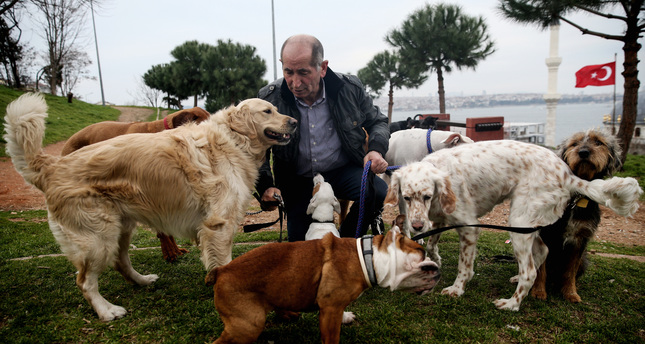 by Anadolu Agency Feb 08, 2016 12:00 am
After spending 20 years as shepherd in the eastern province of Malatya, Bayram Kozat, 56, continues to work as dog walker in Istanbul, where he settled with the hope for a better life. Four years ago, he received an offer to walk dogs, and then he began to continue his life as a dog walker. At first, he had only one dog, but the number of dogs reached nine in a short period of time thanks to his trustworthy nature. Kozat now walks different dogs in Istanbul's busy districts, grabbing the interest of both local and foreign tourists.

Speaking to Anadolu Agency (AA), Kozat said he was living in a mountainous village and used to look after sheep. "Like sheep, dogs listen to my word. What I was doing as a shepherd is similar to what I am doing now. Village life is better, though. I walk with the dogs on busy streets," he said.

Kozat added that being a dog walker is not an easy job, but he likes it. Stressing that he is a real animal lover, he said: "I worked as a shepherd in Malatya for 20 years. I always thought about whether I could return to my first job [as a shepherd] or not. I figured it out, though, and found a similar job. I am now happy with dogs and take care of them. I do not do this job for money. Dog owners are satisfied with my service," he said.

Some people ask him whether they can also become a dog walker. "The owners of these dogs are busy people. Some are famous, while some others are businessmen, actors or authors. Taking care of a dog is not easy. The dogs can start fighting with each other while walking," he said. Kozat takes each dog at 6:00 a.m. He has not yet come across any problems as he has eyes only for them while he is with them. "The dog owners rely on me and give me their own house key. We take a walk until 8:30 a.m. Then I take a rest and take another tour at 2:00 p.m.," he said. In the evening, Kozat brings the dogs back to their homes.

Kozat is criticized sometimes by passers-by. "I give them my response when people say unfavorable things about my job. They say the dogs pollute the streets but I pay attention to everything about them. Sometimes people ask how much I earn," he said. No matter what other people say, Kozat is a dedicated dog walker, who advocates that indoor animals should spend time outside.
RELATED TOPICS