Did you know those Valentine's Day flowers might just be from Kenya? 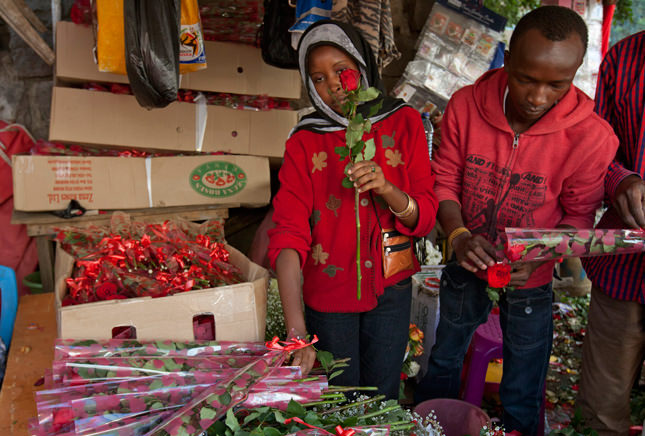 "I know the flowers are for giving on Valentine's Day," said Phanice Cherop, a worker at a flower farm in Kenya. "They are very beautiful."

On a crisp February morning, Cherop squeezed through a row of shoulder-high white roses, cut a flower and methodically placed it in the bunch she carried. The Kenyan-grown flower was likely headed for a vase in Australia, England, Japan or the United States.

Cherop, a 29-year-old single mother of two, works at AAA Growers' Simba farm in Nyahururu, four hours' drive north of the capital, Nairobi. It's the one of company's four 20-hectare (50-acre) farms that make them Kenya's third-largest grower of vegetables and flowers combined. Cherop was one of 600 workers bused in from surrounding villages to pick or pack thousands of roses to be sent around the world ahead of Feb. 14.

Flowers are intricately tied to the global economy. When it collapsed in 2008, the cut-flower trade lost $1.5 billion the following year. In 2013, global exports of cut flowers, cut foliage, living plants and flower bulbs amounted to $20.6 billion, more than twice the amount in 2001.

International events, including Russia's war in Ukraine and plummeting oil prices, have shaped flower fortunes for numerous Kenyan farms. Sales to oil-producing nations, such as Norway and those in the Middle East, have dropped due to their reduced spending power, said Britain-born Andrew Mules, general manager of AAA Growers' Simba farm.

"Up until two years ago, flowers would have been the most profitable part of the farm," he said. "Now it is our third after soft fruit and then vegetable crops."

Kenya is the sixth-largest flower exporter to the U.S., according to the U.S. Customs and Border Protection. As east Africa's agricultural powerhouse, Kenya supplies the European Union with 38 percent of its cut-flower imports, partly due to a tax-exemption trade agreement.

Mr. Mules, who farmed in Zimbabwe before being evicted under President Robert Mugabe's land reforms, said prolonged rains due to the El Nino weather pattern have pressured the company's bottom line.

"The timing of Valentine's Day is perfect for Kenya because it falls in the dry season," he said. "Unfortunately, this year, due to el Nino, it has lengthened the so called 'short rains.' Instead of stopping in November we were getting rain in January."

Another lament is about Russia.

In 2012, flower exports to Russia, the world's fifth-largest flower importer, began shrinking due to its tanking economy and depreciating ruble. Russian military intervention in Ukraine in 2014 only "worsened the situation," said Cindy van Rijswick, a fruit, vegetables and floriculture analyst at Dutch bank Rabobank.

"A more indirect effect is that, because of the declining cut-flowers exports to Russia, these flowers are supplied to other markets, which causes pressure on prices," she said.

Dana Malaskova, AAA Growers' commercial manager, said that up until September 2014, the company was sending a quarter of their flowers to Russia, with a steady 5 percent annual growth; now the volume has shrunk to 5 percent of the total.

"We no longer rely on Russia for International Women's day on March 8, the year's second-biggest flower-giving event," she said.

The drop in Russian demand isn't translating into a drop of the price of a bouquet this Valentine's Day, said Neville Ratemo, a director at Kenya's Horticultural Council.

"There is always a big volume at this time of year and people will always be buying roses, so the price goes up," he said.

The Kenya Flower Council said exports rose from 86,480 tons in 2006 to 136,601 tons in 2014. Kenya's flower business continues to employ half a million Kenyans and earned more than half a billion dollars last year, according to government statistics.

In the temperature-controlled storeroom of AAA Growers' warehouse, stacks of cardboard boxes bound for Canada, Australia, the United States and France are the end point to the process that started with workers like Cherop.

Cherop, who earns Kenya's rural minimum wage of $80 a month, said the arduous manual work is a necessity to feed her family. Giggling, she admits, after a bit of prodding, that she's never received flowers.