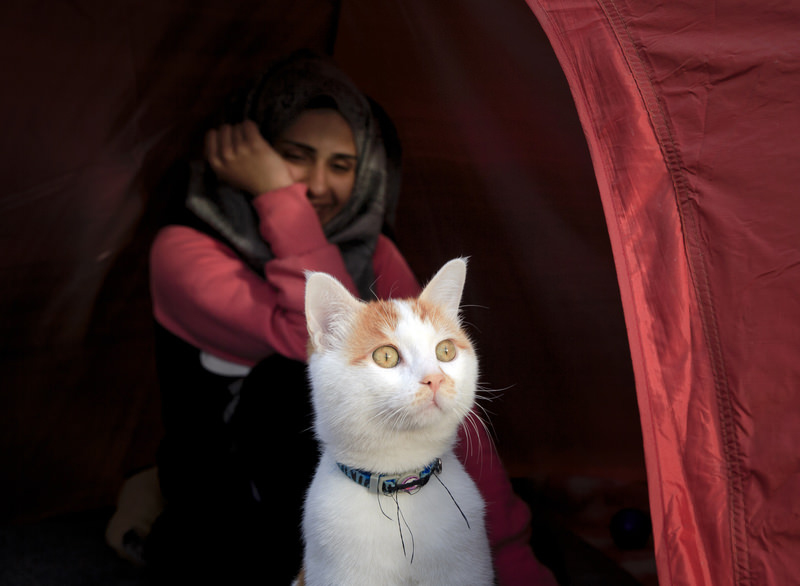 Abeed, her husband and daughter are stuck with about 14,000 others at the Greece-Macedonia border, where sharp stones poke up through the thin bottom of a small tent donated by the Red Cross that is their temporary home.
by Associated Press Mar 11, 2016 12:00 am

Coming from a Palestinian family who had to move to Syria nearly 70 years ago, Abeer al Hosary is now experiencing the same fate with her family as a Syrian migrant in Idomeni, Greece, seeking to take refugee in Europe

Nearly 70 years after Abeer al Hosary's parents fled Palestine, she is reliving their fate, forced to leave home with nearly nothing and start again from scratch in a foreign land. She grew up in the apartment upstairs from the bakery they built in Syria, part of the new life they created for themselves after they met in the Yarmouk refugee camp for Palestinians fleeing the 1948 Arab-Israeli war. She heard about Palestine from her parents but has never seen it, and she considers Syria her homeland. More than anything, she yearns to return and to see her family whole again.

"Syria is the country that has fed us with its blessings," said al Hosary, 48, tears of homesickness and despair welling in her eyes. "I'm a Palestinian by name only, and by my roots. But the air, the sun, the breath it's Syrian. ... To me, Syria was paradise on earth. We never expected this to happen."

Now she's one of an estimated 5 million Syrians in a terrible exodus from a country torn apart by war. She and her husband and daughter are stuck with about 14,000 others at the Greece-Macedonia border, where sharp stones poke up through the thin bottom of a small tent donated by the Red Cross that is their temporary home.

They are among the nearly 5 million Syrian refugees who fled home for Lebanon, Jordan, Turkey and Europe. Most of those who chose to try for new lives in Europe took rickety boats from the Turkish coast to nearby Greek islands in short but perilous journeys, heading north from there to richer countries like Germany and Sweden.

Al Hosary's family is scattered across the continents. Her youngest son Emad is in Sweden he made it there three years ago when he was just 17, after boarding a boat in Egypt bound for Italy and then making his way north. Smugglers paved the way, but the price 6,500 dollars in all was too high for the family to afford sending more than one person.

Now all she, her husband and daughter want is to be reunited with him.

She sent him away right after her eldest son, who would now be 28, was arrested by the police in Syria while checking on the home they had fled in an area that came under rebel control. They haven't heard from him since.

Emad was well-built and of military age, and al Hosary was terrified he would be next, or that soldiers would forcibly recruit him into the army.

She herself didn't want to leave Syria, a country she loves passionately. But after a while, staying just wasn't an option.

On Feb. 20, she, her husband Ali Mohammed Aboud and their 22-year-old daughter Israa Aboud packed up a few belongings and their large white and ginger tomcat and fled.

They tucked Taboush which means fatty in Arabic into a baby carrier and hid him under blankets for the terrifying escape from Syria. "We smuggled him out," she says of the cat, who romps around inside the tent, leaping at the shadows passers-by cast on the tent walls. "It's amazing, when we went through the roadblocks, he was so quiet and wouldn't even poke his head out. It's as if the cat knew." They made their way through Turkey and then onto a boat bound for the Greek island of Chios. From there they took a ferry to the mainland, and then headed north until they reached the Greek-Macedonian border a week ago.

And here, in an increasingly fetid field of tents near the railway tracks near the village of Idomeni, they were forced to stop along with up to 14,000 others. The Macedonians were restricting the flow of refugees through their border to barely a trickle, and on Monday, nobody crossed. After a European Union-Turkey summit in Brussels Monday, it appeared increasingly likely their route forward would be blocked for good. "At this rate, I don't think we'll get through. We leave it up to God to decide," al Hosary said. Although the journey to get here was fraught with danger, sitting in a field day after day, with scant opportunity to wash and hope draining away by the hour, is no easier.

"These conditions are also very difficult," she said. "We're not used to this. ... Today I'm so pessimistic. I've reached my limit." The family has no home to go back to. The only future they can see is to move forward, and above all to be reunited with Emad in Sweden.

But European leaders have balked at the immensity of the problem they face: dealing with the seemingly endless flood of men, women and children desperate for safer, better lives in their countries. One by one, the border restrictions have grown along the western Balkan route.

"Going back is impossible. Sitting here is impossible. Crossing is impossible. Where is this Germany that told us to come?" al Hosary asked. "The Arabs shut the doors in our faces, and the Europeans opened them. Where are they now?" "We lost our rights in our homeland, in Palestine, and we lost them in the Arab countries. Let us not lose them again in the European nations," she said. Israa, who studied architecture and computers and worked in Syria as a teacher, also dreams of returning home. "For me, my attachment is to the ground, the streets and the earth more than to the people there," she said. Her father worries about his family's future and prays for the borders to open. "Here, it's depressing. Cold and depressing. My money's almost run out. We hope for an opening," Aboud says. "There's no way back home now."