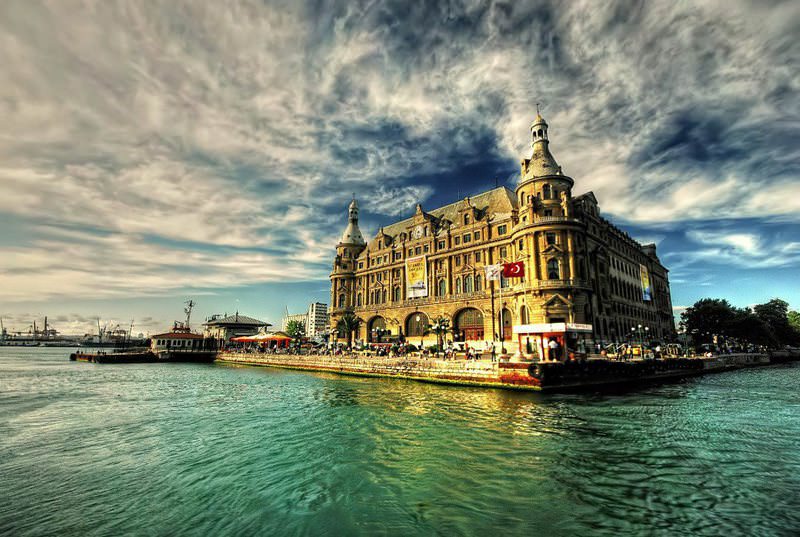 by Daily Sabah with AA Mar 25, 2016 12:00 am
Istanbul's iconic Haydarpaşa Train Station on the city's Asian side will undergo a through restoration, and studies are currently ongoing to understand how the building was constructed.

The train station was built 106 years ago during the reign of Ottoman Sultan Abdülhamid II and has undergone improper renovations over the years. Moreover, its roof was greatly damaged following a fire six years ago. Restoration experts are currently working on how wooden pylons were placed on a sand foundation more than a century ago. A protective roof is planned, which will minimize rain damage, and the station's stained-glasses, which has lost its original vibrancy, will be renovated to bring back its original form designed by German artist O Linneman.

Described as German architecture embedded in Turkish locomotives, the historic train station's architectural structure will be thoroughly examined to undo the improper restoration. Preliminary studies started three months ago, and the new renovation has been approved by the relevant governmental authorities. The station was built by German architects Otto Ritter and Helmuth Cuno as the starting point of the Hejaz railway. Many of the station's sections as well as the passenger lounge were opened in 1908. In 1979, the station's certain sections were damaged during the Independenta tanker accident, in which a Romanian crude oil carrier exploded after colliding with a Greek freighter on the Bosporus. The wreck burned for weeks, causing heavy air and sea pollution around Istanbul and throughout the Marmara region. The station will remain in service after the upcoming restoration work.
RELATED TOPICS