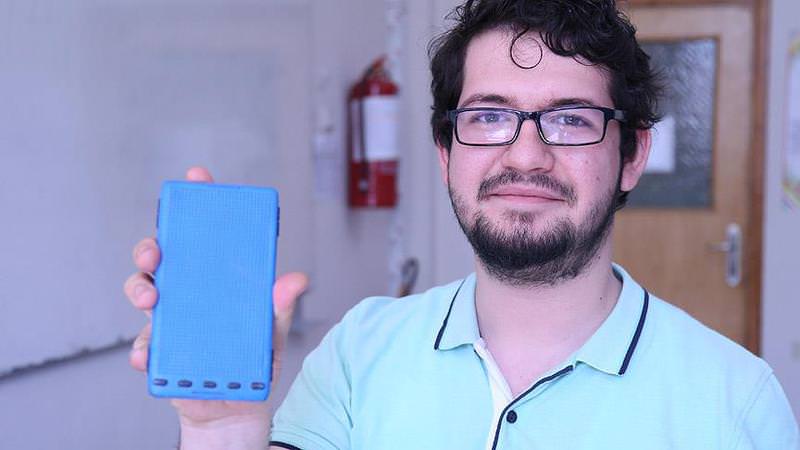 by Anadolu Agency Apr 01, 2016 12:00 am
The new smartphone known as the "tactiX" will soon hit the market, making life easier for the visually impaired. The first-prize winner at the Young Innovators' Competition - organized by the International Telecommunication Union (ITU) in 2015 - the new smartphone was designed by a student, Uğur Can Bastık, and his professor, Selçuk Sırrı Tercan, who are affiliated with Sakarya University's Department of Computer and Education Technologies. Speaking to Anadolu Agency (AA), Bastık said of the roughly 258 million visually impaired people living worldwide, less than 10 percent of them are literate due to problems related to the Braille alphabet. So, Bastık and Tercan submitted applications in hopes to receive techno-enterprise funding from large companies such as Turkcell and Intel as well as the Science, Industry and Technology Ministry. Although the duo has received many offers from other countries, Bastık and Tercan wanted to see their project completed in Turkey.

Thanks to the phone's voice- and touch-operated navigation system, the visually impaired will no longer need assistance while traveling from one place to another. The module versions of the "tactiX" will be placed in central locations such as bus stations and subways, offering a solution to everyday difficulties they face. Namely, with indoor navigation, the visually impaired will be able to enjoy their shopping experience in malls without requiring assistance. The new device will allow them to read books or newspapers online, surf the Web and use social media services like Facebook and Twitter.
RELATED TOPICS