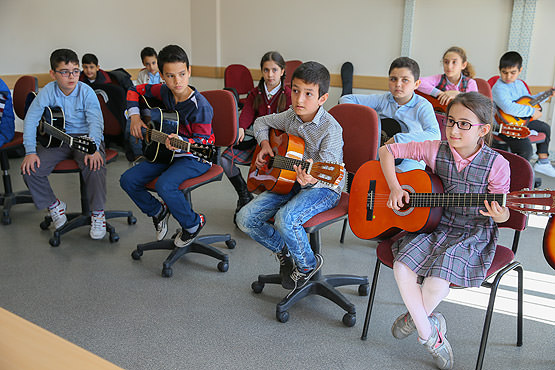 by Daily Sabah with AA Apr 06, 2016 12:00 am
Art and music courses have opened for Syrian refugee students in the Aegean province of İzmir with volunteer teachers from the city's Gaziemir district. As part of the "Okullar Hayat Olsun" (Let Schools Give Life) project, nine courses have opened at the Anafartalar Primary School located in a neighborhood with a dense refugee population.

The courses are aimed at refugee children, especially who act violently or have truancy problems. The children attend the classes in their spare time as the project aims to encourage students to spend more time at such courses instead of staying on the streets. So far, around 30 Syrian students have been introduced to different entertaining courses like guitar, sculpture, drama, marbling, painting, folk dances and various sports. Children spend more time with their classmates during the courses, which help them develop social interaction. Samet Başkonuş, the school's principal, told Anadolu Agency (AA) that children suffer from behavioral problems, while some of them are indifferent to the school and do not want to attend the classes. Başkonuş said the classes during their leisure time have reduced the students' behavioral problems and drive them to come to school regularly.

Yahya Aladullah, a 9-year-old Syrian student, said he came to İzmir last year and takes painting courses at the school. His teachers said Aladullah was a very asocial and rebellious child when he first arrived. His paintings reflect his days in Syria when he used to go fishing with his father or watch it snow outside. Similarly, Hasan Mustafa, 12, is another Syrian student from Aleppo. He learns how to make masks in the class and enjoys it. Syrian refugee children are at risk for a range of mental health issues, having experienced very high levels of trauma during the Syrian civil war. Moreover, many of them show symptoms of post-traumatic stress disorder. A study titled "Research on Syrian Refugee Children," which was conducted by Bahçeşehir University researchers in collaboration with New York University last year, demonstrated that almost half of all refugee children living near the Syrian border suffer from clinical depression and more than 30 percent were found to have experienced trauma. Similar projects and entertainment activities are crucial to re-socialize refugee children.
RELATED TOPICS