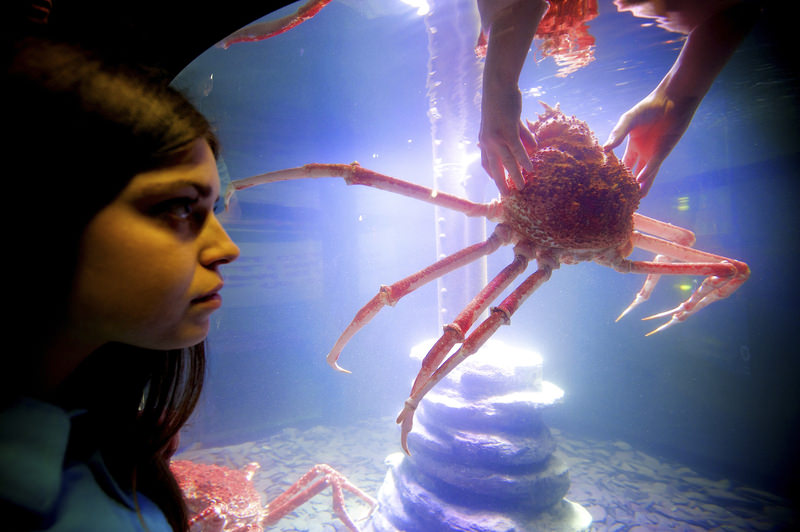 by Daily Sabah Apr 19, 2016 12:00 am
For those who want to discover an underwater world, Istanbul's Sea Life Aquarium is currently hosting a Japanese spider crab, which is the strongest known crab species. Some have characterized it as one of the most attractive sea creatures in the world, while others consider it the scariest; however, contrary to speculation about the Japanese spider crab being an "alien creature," it is very much an earthly creation and the largest marine crab, living at depths of approximately 500 meters in the Pacific Ocean near Japan.

The Japanese spider crab is endemic and is able to live for over 100 years. This unique and huge creature has the greatest leg span of any adult arthropod, reaching 4.5 meters from claw to claw, and the whole crab can weigh up to 20 kilograms. The body may grow to a size of 40 centimeters or 16 inches in width, which has earned the crab the nickname "Crabzilla."

The Japanese spider crab brought to the Sea Life Aquarium has a leg span of 80 cm from claw to claw. A mechanical device installed next to the crab's aquarium gives visitors an opportunity to test the strength of the sea creature. The device resembles a pair of pliers, which offer resistance equal to the strength of the Japanese spider crab. This device is not physically connected to the crab and will not pose any harm to it. Çağdaş Güven, the curator of the aquarium, said, "It is a widely known fact that alligators have the strongest jaws in the world. Compared to an alligator's jaw, the strength of the Japanese spider crab's claw is greater." The Sea Life Aquarium, which is the biggest aquarium in Europe with its turtle hospital and 83-meter-long ocean tunnel, hosts the largest shark family in Europe, colorful tropical ocean fish and piranha, along with 15,000 sea animals, and is happy to welcome a Japanese spider crab as the newest member of their giant ocean family.
RELATED TOPICS