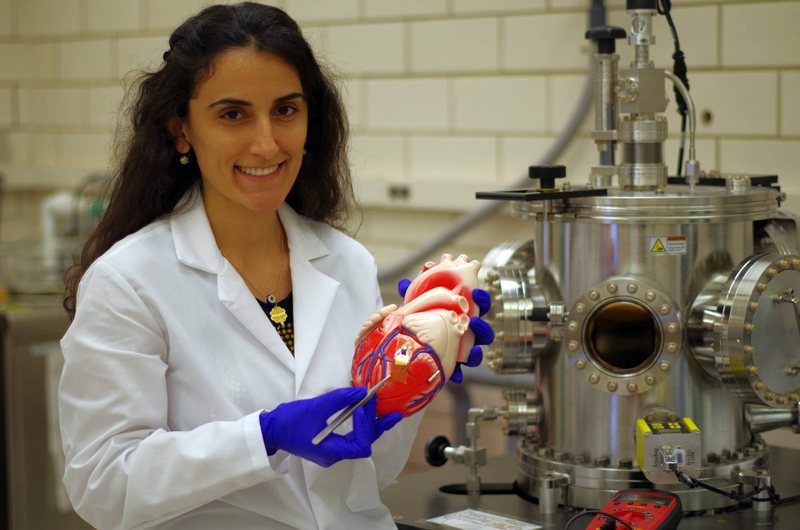 by Daily Sabah with AA Apr 19, 2016 12:00 am
Canan Dağdeviren, the first scientist from Turkey to be named as a junior fellow by the Society of Fellows (SoF) at Harvard University and known for her award-winning "battery-free cardiac pacemaker" project, has been invited to join the faculty of the Massachusetts Institute of Technology (MIT).

Dağdeviren, 32, was named on the "Forbes 30 under 30 in Science" list and also the "Innovators under 35" by the MIT Technology Review last year. Dağdeviren received a Fulbright Doctoral Grant in 2009 and received a PhD. in material science and engineering at the University of Illinois at Urbana-Champaign. "I had a project in my mind and I knew I could realize it at the University of Illinois as I wanted to work with a specific adviser," Dağdeviren said.

The chip developed by Canan for her project converts the kinetic energy of heartbeats to electricity, powering the pacemaker without the use of batteries. Canan calls her invention a "wearable pacemaker," which is a thin film that converts the energy released by the movements of the heart, diaphragm and lungs into electrical energy and stores it. The reason behind Dağdeviren's interest in cardiology is her grandfather who died of coronary failure at an early age. At first, when she was working on her wearable peacemaker project, some people called her the "Crazy Turkish Lady" as her name is hard to pronounce. Dağdeviren said she only sleeps for two hours on Sundays and tries to help students that contact her.

"I also mentor students and want to create a network. Even some call me 'Rumi,' for which I feel highly proud of my efforts," she added. Dağdeviren is expected to start at MIT in January.
RELATED TOPICS