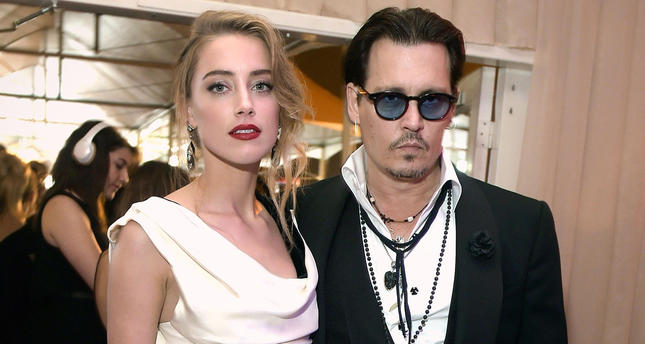 by Apr 19, 2016 12:00 am
Amber Heard, wife of fellow Hollywood star Johnny Depp, avoided a criminal conviction carrying the possibility of 10 years in jail Monday after an Australian court dropped smuggling charges against her for bringing her two pet dogs into the country.

Heard was instead given a one-month, AU$1,000 ($767) good behavior bond by the Queensland court, meaning she is free to leave but would have to pay the amount if she commits another offense within the next month, reports said.

She pleaded guilty to a charge of falsely filling in her immigration card in April last year when she landed in a private plane with her two pet Yorkshire terriers Pistol and Boo, broadcaster ABC reported.

Minutes after the trial began in Southport Court, prosecutors dropped the more serious charge of illegally smuggling the two dogs into the country, avoiding the need for a four-day trial during which Depp would have had to appear as a witness.

Heard's lawyers handed Magistrate Bernadette Callaghan a video in which Heard and Depp apologized for declaring on their customs form filled out upon entry they had no animals with them despite having the pet dogs on the private plane.

Heard said in the video that she had great respect for Australia's strict quarantine laws, while Depp warned others to respect Australia's laws when entering Australia.

"Australia is a wonderful island, with a treasure trove of unique plants, animals and people," Heard said at the start of the video.

"It has to be protected," Depp added.

"Declare everything when you enter Australia," Depp said at the end of the short video.

Heard's lawyer Jeremy Kirk told the court the couple's staff had incorrectly prepared the form, that Heard was jetlagged after a nine-hour flight and had committed an "oversight."

Kirk said the dogs had been vaccinated against rabies. Australia does not have rabies, and their strict quarantine laws are in place to keep the animal disease off the island continent.

The magistrate said it appeared to be an isolated incident and ordered that no conviction be recorded.

The couple emerged from the court and was greeted by more than 100 cheering fans as well as a swarm of media as they were escorted to their limousine by police.

Heard and Depp are expected to fly out of Australia in time for her to celebrate her 30th birthday on Friday.

In the morning a smiling Depp said nothing as he brushed past reporters on his way into court after stepping out of a black limousine wearing dark glasses, a black suit, black shirt and black and red striped tie. Heard, dressed in a black suit with a cream-colored shirt, only replied "Fine, thanks" when asked how she was by reporters.

Several fans called out their support, saying "Go Johnny, we love you," with one man asking Depp for an autograph.

Four days had been allocated for the trial, with Depp due to appear as a witness, but after a last minute deal with government prosecutors the matter was resolved within hours.

Heard was charged after taking Pistol and Boo into Australia in April of last year while Depp was filming Pirates of the Caribbean 5 on the Gold Coast.

The case hit world headlines in May, with Agriculture Minister Barnaby Joyce telling the couple their dogs Pistol and Boo had to "bugger off" back to the United States or they would be put down.

Joyce said nobody - not even Depp, once proclaimed "sexiest man on the planet" - could breach those laws.

Later, from outside the country, Depp hit back at Joyce, joking last June that he had eaten the dogs, and the couple vowed to avoid Australia in the future.

Joyce has since been promoted to Deputy Prime Minister, and a spokeswoman told the Gold Coast Bulletin Monday he would have a lot to say after the case.

"The law applies to everyone," she told the newspaper. "Our Australian biosecurity laws exist for a reason and we are doing everything we can to ensure our country remains free from pests and diseases."
RELATED TOPICS