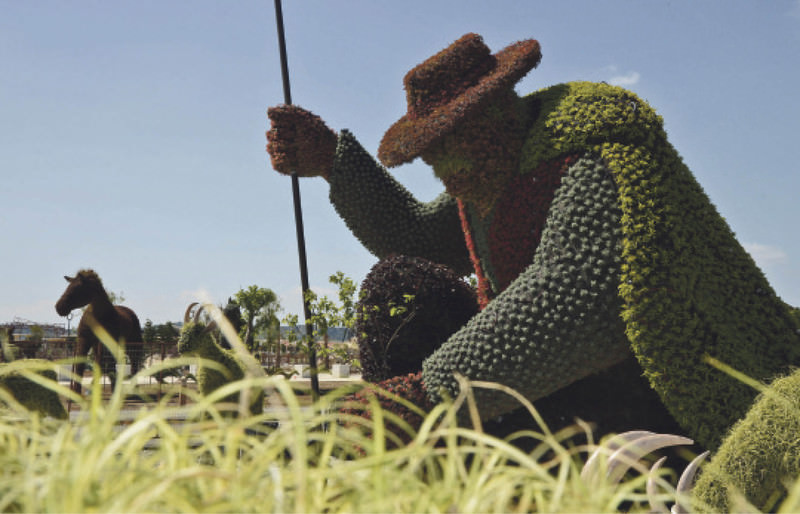 by Daily Sabah Apr 22, 2016 12:00 am
EXPO 2016 Antalya, in which the flora of 51 countries is displayed along with 1.5 million plants, will opened with an official ceremony today attended by President Recep Tayyip Erdoğan and Prime Minister Ahmet Davutoğlu.

On the same day, Erdoğan and Prime Davutoğlu will unveil 41 other projects directly connected to EXPO 2016, including Antalya's second light rail system line and interchanges that will ease transportation to the EXPO 2016 center. While the light rail system line's contract was for 450 days, it was completed in a record 150 days and will open for service. The 19-kilometer line cost TL 350 million ($124 million) and new interchanges built by the General Directorate of Highways cost TL 300 million. The Antalya Municipality also purchased TL 100 million worth of vehicles and paid TL 150 million for landscaping around the interchanges, adding up to a total 900 million spent on the projects in five months.

A total of 521 projects from ministries, municipalities, governorships, district governorships, universities and associations applied to the event. An evaluation and five-person selection committee of found 38 projects eligible for display. Among the projects to be exhibited are ecological buildings, vertical gardens, eco parks, theme parks, urban design projects and various projects for children.

Included in EXPO 2016, which will be held in Turkey for the first time, the flora of 51 countries from the U.K. to South Africa and Italy to South Korea will be on display. In addition to the introduction of the plants, EXPO 2016, which was built on a 121-acre exhibition area in Antalya's Aksu district, will also include other elements such as EXPO Tower, Expo Lake, Children's Island, Agriculture Museum, Science and Technology Center for Children. "Flowers and Children" themed EXPO 2016 Antalya will be an entertainment park for both children and grown-ups.

On the first day of EXPO 2016 Antalya, Turkish Stars, one of the world's few supersonic aerobatic teams, will perform a show. Seven F-5 jets will take perform the aerobatics. Green will dominate EXPO 2016 with 500,000 plants of 60 species. Nearly 5 million seasonal flowers were also planted on the common ground outside the country gardens.

One of the most attractive parts of EXPO 2016 Antalya will be the Mosaic Culture, which displays 108 plant sculptures on 10 surrounding islands around the Children's Island. It is surely expected to become an area that people will visit and take photos the most. While the has 250,000 plants on it, The 250,000 plants that comprise the 4.5-meter tall princess figure were planted one-by-one by specialists.

A total of 700,000 plants were used on the sculptures, which were designed in accordance with the biodiversity and historical sub-themes of EXPO 2016. The live plant sculpture exhibition has themes such as the birth of civilization in Mesopotamia where the first wheat grew, silk worms and the Silk Road, agriculture and domestication in Asia, rice and bamboo in Asia, the pastoralist Maasai tribe in East Africa and a symbol of hope in the "tree-planting man."

Expo Hill also hosts the medicinal and aromatic plants growing in Antalya and different geographies in Turkey. On a 2,000-square meter area on the EXPO Hill, plants from nearly 68 species were planted, including thyme, bluebeard, baby's breath and saint-john's-wort.

Work on the plant sculptures, whose construction was completed in Canada and brought to EXPO 2016 Antalya, were finished in coordination with the Canadian-based Mosaicultures Internationales De Montreal by a team of Canadian specialists and Turkish gardeners – the first of its likes in Turkey. All plants used for the sculptures were grown in Antalya.

The symbolic trees that were requested from the governorships of 81 provinces by the Food, Agriculture and Livestock Ministry for EXPO 2016 Antalya were planted on 1,000 square meters that forms Turkey's Forest on EXPO Hill.

The saplings of the symbolic trees including Taurus cedar from Niğde, black pine from Eskişehir, Caucasian spruce from Artvin, magnolia from İzmir and juniper from Aydın were planted in the exhibition area. There will be ID tags in front of all the trees in Turkey's Forest. After the Celebrities Forest and G20 Peace and Friendship Forest, Turkey's Forest is the third special forest in EXPO 2016 Antalya.

With the slogan: "A green world for the future generations," EXPO 2016 Antalya will also display 38 model implementation projects on the improvement of urban quality of life. The models chosen for display at "Urban Best Practices Area" event were selected from 521 projects, which present and contribute to the establishment of more beautiful and livable cities.