How French culture is represented in Istanbul 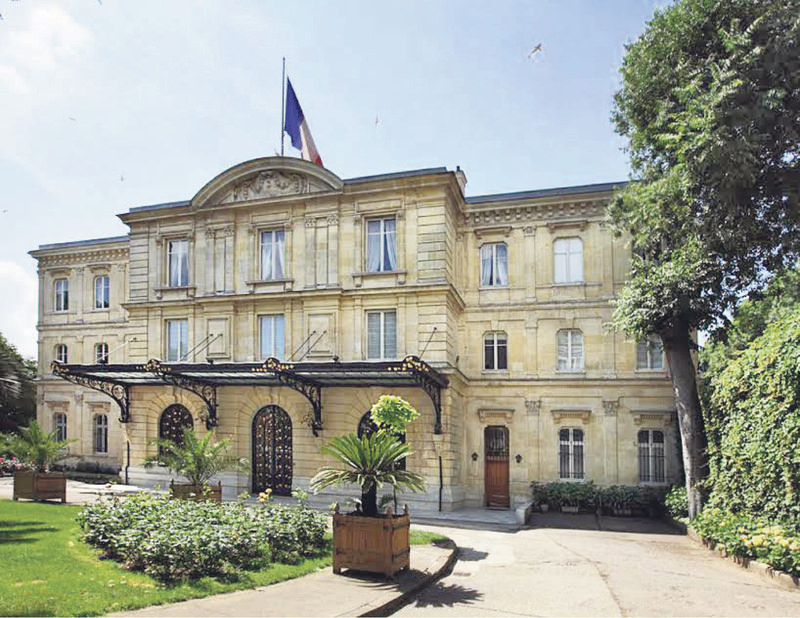 France is a uniquely beautiful country, known for its romanticism. It offers a variety of tastes to the world, including dazzling perfumes, sophisticated automobiles and dozens of major brands which are household names around the world. All of these things represent the reserve, power and charism of France. The cities of Paris, Cannes, Nice, Bordeaux and St. Tropez are famous, iconic places that come to mind when we think of the country. For some, these cities are a vacation route full of adventures and, for others, like myself, they represent ideal honeymoon spots.

The Istanbul representative of this charming country is Muriel Domenach, Consul General of France in Istanbul. What a lady! She is always warm and full of energy. When I ask her the source of her energy, she says her greatest motivation is her love and dedication to her country. Having previously worked for NATO, Domenach now lives at the French Palace in Beyoğlu, with her three children and her husband Olivier, who just so happens to be an Ottoman historian. Fluent enough in Turkish to post updates on social media in Turkish, Domenach is as hospitable as the Turkish people. Frequent parties which are held in the palace also attest to this fact. In particular, the 1,000 Chefs, 1,000 menus and five-continent themed "Good France" party which was organized recently was incredible. French cuisine has once again been introduced to the world in a glorious event simultaneously organized at French consulates worldwide. We have tasted the unique delicacies of Chef Olivier Pistre in the Istanbul branch of this event. Above all, being able to get a taste of history within the palace was magnificent. I particularly admired the garden of the palace, the history of which dates back to the Ottoman period. The very first alliance between France and Turkey was established between Sultan Süleyman and King Francis I against Charles Quint in 1536. Then, Sultan Suleiman has granted his ally the relevant land for the construction of the embassy. With its high ceilings, Baroque-inspired architecture, ponds and diverse foliage, the French Palace is Istanbul's hidden paradise. So, it makes sense why the French Consulate uses the hashtag #LaFranceaIstanbul, meaning "France in Istanbul" for their events which is certainly significant.

For the past two years, Muriel Domenach has also organized a Ramadan Night and concert in the French palace to commemorate the month, which is a special time for Muslims, and encouraging depolarization among people of different faiths. According to her, secularism should never be an obstacle faced by practicing believers of any faith, including that of Muslims, which make up the second largest part of France's religious population. She hosts a special dinner for the breaking of the fast during Ramadan as well, hosted at the residence of a diplomat.

The French acknowledge the month of Ramadan with the French phrase, "Bon Ramadan" and the consulate's office has scheduled its next Ramadan dinner to be held on June 9..

Despite living in an extravagant palace, Muriel Domenach loves strolling on the streets of Beyoğlu as much as she does the streets of Paris. Walking among historical buildings to reach short distances, reminds the consul of her homeland. She recommends that visitors explore Istanbul on foot; and the consul usually spends time with her family in Üsküdar and Çengelköy. The Mihrimah Mosque is among her favorite historical sites and she describes the district of Üsküdar as calm and conservative and dynamic and colorful. The consul enjoys travelling by boat from Kuzguncuk to Üsküdar with her family. She has also fallen in love with the Turkish side dish, meze, with her favorites being fish and fresh vegetables. With regard to holiday destinations, Turkey's southern cities of Asos, Ayvalık and Antalya are the consul's favorites.

The French Cultural Center located in the consulate is just the heaven of wisdom. Located a very short distance from Taksim Square, the center offers educational services and exhibitions. In joint projects developed with İSMEK in the Istanbul Metropolitan Municipality, the center cultivates instructors who can provide French language courses at the language education center located in the municipality. The importance of the French language in Turkey is likely to increase when we consider that trade relations between Turkey and African countries are developing. Furthermore, the Anatolian Studies Institute located inside the French palace is worth paying a visit. The institute conducts research on Turkish-Ottoman history in tandem with the social and cultural structures of the population of the region. The center offers a rich library as well, which is simply marvelous.

Striving to demolish the negative clichés associated with France during her time as consul, Domenach seeks to depict French clichés in a positive light. By successfully making every important day and week into an opportunity to promote France, Domenach is introducing French brands to Istanbulites using her hospitality. In addition, the contributions of the Commercial Attache Eric Fajole, cannot be overlooked in the process. Fajole is a real gentleman, full of knowledge. I have learned that the music applications Deezer and Enjing, which were created by young people , are French. Moreover, the attaché has told me that the electronic brand Schneider, which sounds German, is also French. In the same way that he has enlightened me, Eric Fajole continues to introduce the best French brands to Istanbulites, ranging from pastries to cosmetics, fashion and automobiles. He has contributed to the increase of trade between the two countries with his modesty, warmth and knowledge. I would like to congratulate him on his success.

As a successful team leader, the consul also applies her outstanding work ethic to her life as a mother. Domenach has expressed how happy she is to be living in Istanbul with her three children, praising Istanbul for the attention and sensitive empathy shown to her children in local restaurants, on the streets and at school. She says that, at first, she did not understand why strangers would kiss, hug or peck the cheeks of her small children when she first came to Turkey. However, she says that now she understands it to be a display of warmth and love within Turkish culture. Still, the consul believes that we live on different planets regarding fellowship. According to her, a person who shows affection to another person's children in the supermarket does not display this same attitude when behind the wheel of a car in the parking lot of that same supermarket. Domenach added that these types of quirks make Istanbul a distinguished and dynamic city. Muriel Domenach considers life like a poem: everyone has a different one, and our lives are short.

In a lengthy conversation about France, the consul made invaluable recommendations about where to experience the best French food in Turkey, and my suggestion is the La Petite Maison. Located in Istanbul's Nişantaşı district, the venue is a foodie's heaven with historical decorations, elegant service and unique food. Featuring original oil paintings, white tables and a rich menu, it will be easy to fall in love with France once again. I recommend making a reservation and visiting La Petite Maison the first chance you get.