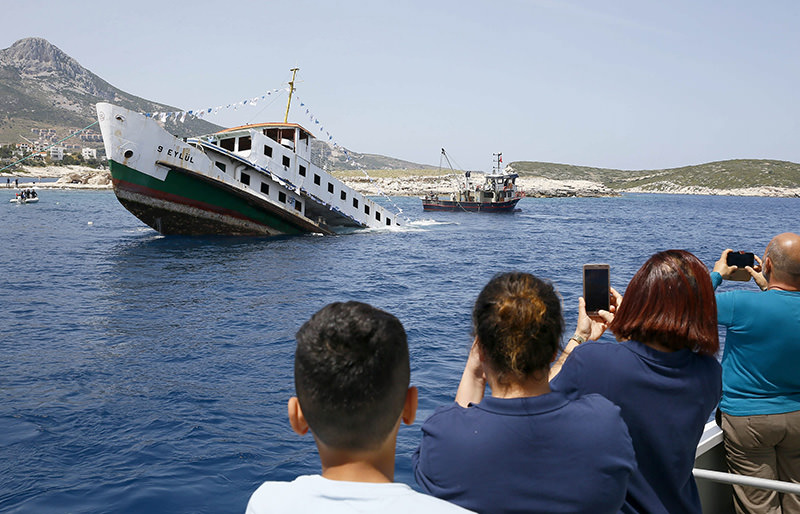 The vessel 9 Eylül, which was ferried between the city's Konak and Karşıkaya districts along the Gulf of İzmir for nearly 40 years, was submerged off Karaburun's Küçükada Island as part of the Artificial Reef and Tourism-Oriented Wreck Project. The ceremony was overseen by İzmir Governor Mustafa Toprak.

Attendees were taken on two passenger boats to the place where the ship was to be submerged, to witness the unforgettable moment accompanied by sirens. The veteran ferries will serve as the scaffolding for an artificial reef and the sea life that comes along with it to dive tourism in the depths of the Aegean Sea.

Built in the Alaybey Shipyard in 1976, the ferries 9 Eylül and Alaybey served İzmir locals and have been a part of the city's history for years. They sailed countless times between the ports of Karşıyaka and Konak side by side. After completing their service, they were decommissioned in 2012.

Right after the submersion of the 9 Eylül ferry, which was submerged off the coast of Küçükada, the Alaybey ferry was safely submerged off the coast of Büyükada to about 45 meters under the surface on May 1. The procedure took nearly one hour and curious divers also attended the ceremony. To create new environments for marine life and establish a new and different destination for diving, the projects drew great attention from the public.

The Karaburun Peninsula is located in the northwestern part of the region typically known as the Urla Peninsula. It is surrounded by Urla to the east and Çeşme to the south, just 15 kilometers away from the Greek island of Chios to the west. The island neighbors Lesbos to the north and Turkey's island of Foça to the northeast. The eastern and northern coasts of the peninsula are in the southern part of the Gulf of İzmir.

The peninsula is not very well-known around the world, despite its natural beauty and unique environment. The region's rough terrain may be the main reason why Karaburun has stayed hidden until now. With the recent road work, however, it is much easier to reach the peninsula. The latest projects aim to make Karaburun a world-famous diving paradise in the near future.

Located at the western end of the Gulf of İzmir, Karaburun is the most untouched part of the peninsula. Even though it has attracted locals seeking to swim in its crystal-clear water on its Blue Flag beaches but has yet to reel in international tourists.

Karaburun Mayor Ahmet Çakır said that these two veteran ferries will make great contributions to diving tourism by creating reefs, adding that it will also increase the fish population.

Pointing to similar projects which were also undertaken on the peninsula, Çakır said that a C-47 aircraft from Turkish Air Forces was submerged after being cleared of environmentally hazardous substances in part of the Mordoğan Underwater Archeopark and Artificial Reef Project. "We have three diving schools in the district and we believe that, with similar projects, the number of diving schools will increase and Karaburun will attract more local and foreign tourists, as the sea is very suitable for diving," he said, noting that the project is being completed under the Transportation, Maritime and Communications Ministry to boost diving tourism in the region. Future projects aimed at creating artificial coral reefs will continue in coordination with the Culture and Tourism Ministry and the Karaburun Municipality.