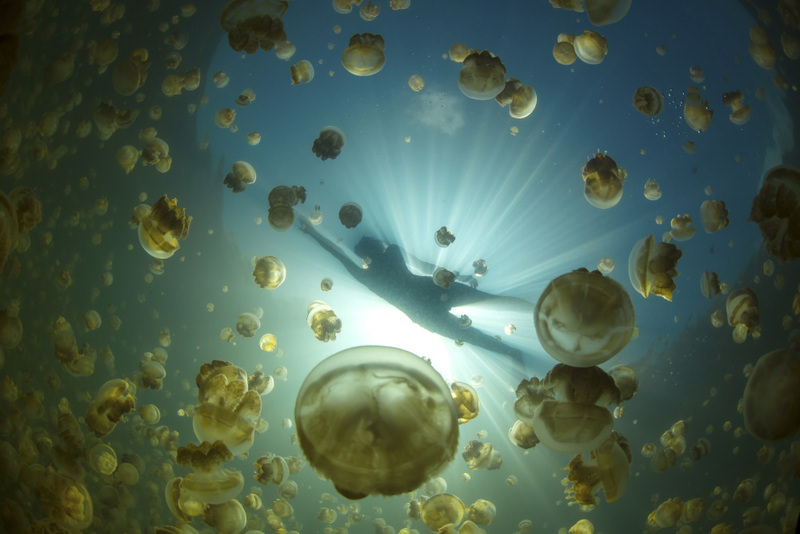 by Associated Press
May 04, 2016 12:00 am
The big question at Palau's Jellyfish Lake: Where are all the jellyfish? Part of a UNESCO World Heritage area, the saltwater lake has long been a source of wonder for tourists, who have delighted in snorkeling among the millions of golden jellyfish that can fill the water as thick as corn chowder. But some tourists in recent weeks have struggled to find even a single jellyfish, prompting at least one tour operator to suspend its trips. Scientists blame a severe drought, coupled with hotter temperatures caused by the El Nino weather pattern, a warming of parts of the Pacific Ocean that changes weather worldwide and tends to push up global temperatures.

While scientists say there's every chance jellyfish numbers will rebound when conditions improve, they also worry that global warming poses a long-term threat to the delicate ecosystem of Palau, a tiny western Pacific island chain.

About a month ago, scientists at Palau's Coral Reef Research Foundation estimated the numbers of golden jellyfish at the lake had declined from about 8 million to 600,000. Since then, the numbers have dropped further.

"Just the past couple of weeks, the numbers have drastically declined," said Collin Joseph, a coastal manager for Palau's Koror State. He said the adult jellyfish have pretty much died out completely, while some juveniles remain. The decline is particularly concerning because the jellyfish in the lake are a unique subspecies that have developed in isolation from their lagoon ancestors. Koror State Governor Yositaka Adachi last week decided to keep the lake open, at least for now. He said in a statement that rainfall in the area over the past four months was the lowest in 65 years, but that there remained enough polyps, which produce jellyfish, to ensure the population could eventually recover.

But some aren't waiting for that.

"Many tour companies including ours that have been taking guests to the lake have not seen any jellyfish," Sam's Tours wrote in an April 22 note to its sales partners. "We at Sam's Tours have therefore decided to suspend our tours to Jellyfish Lake with immediate effect until further notice." Scientists are still trying to figure out exactly how the hot and dry conditions are affecting the jellyfish. Governor Adachi wrote that the lack of rain had reduced runoff into the lake, which had affected the tiny plants and animals the jellyfish consume. The Coral Reef Research Foundation also noted the lack of rain had caused the lake to become saltier than ever previously recorded, in monitoring which dates back to 1998.

"The exact cause of the decline in the population of golden jellies is not yet understood, but it is clear at present that young (jellyfish) are not surviving very long after release by the bottom-dwelling polyp stage," the foundation wrote in an April Facebook post. It added: "The golden jelly population could be on the verge of crashing" to the point where there were no more swimming about the lake.

The foundation noted the population had crashed once before, in 1999, but had rebounded 18 months later because some polyps had survived.

Jellyfish Lake is unusual in being a small body of seawater surrounded by land. Channels to the sea remain deep in the limestone rock beneath the lake. Below about 13 meters (40 feet), the lake has little oxygen and high concentrations of hydrogen sulfide, making it dangerous for scuba divers. Due to their isolation from the ocean, five marine lakes in the area have produced five different subspecies of golden jellyfish.

Scientists say a common myth about the jellyfish in the lake is that they don't sting, when in fact they can give swimmers a mild sting, which can be compounded by prolonged exposure. Los Angeles-based photographer and model Amber Arbucci discovered that in 2013, when she completed a 7-hour naked photo shoot in the lake for her collection "The Girl at Jellyfish Lake." "I was so stung my eyes were swollen and I could barely walk," she told The Wall Street Journal. She wrote on her website, however, that she still found the jellyfish filled with charm -"powerful, and yet so fragile all at the same time."