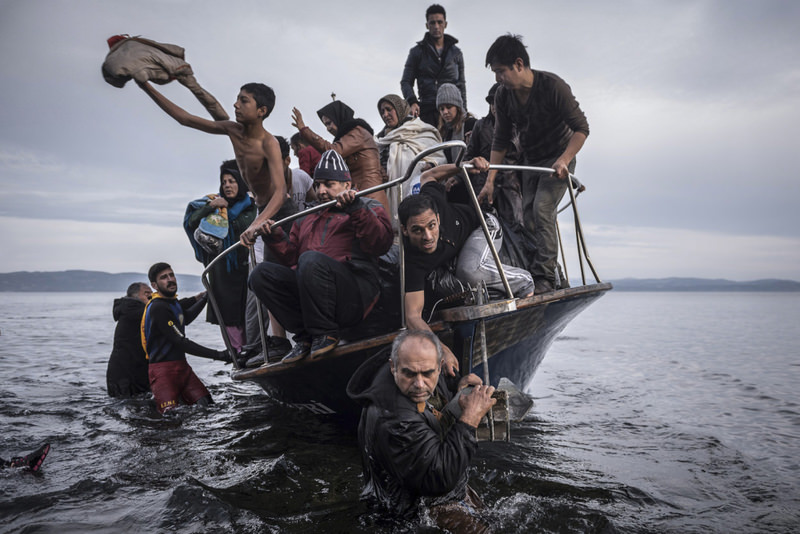 by Anadolu Agency May 05, 2016 12:00 am
Pulitzer Prize-winning photographer Sergey Ponomarev told Anadolu Agency (AA) about the story behind his world-famous images that have captured Europe's refugee crisis.

Speaking in Moscow, Ponomarev - who won this year's Single News category "Photo of the Year" award at AA's Istanbul Photo Awards - recalled the moment Syrian refugees were trying to set foot on the Greek island of Lesbos. "The weather was bad, the wind was strong and the waves were extreme. The boat approached the island where the sea was deep. As refugees jumped into the sea, the captain was maneuvering to find shallow water. I pressed the shutter while some refugees were in the sea and while some others were preparing to jump into the sea. It was dramatic," Ponomarev said. Ponomarev's images formed part of the international coverage that earned a Pulitzer Prize last month. Over the past year, thousands of people have made short-but-perilous attempts to cross the Aegean Sea from Turkey in a bid to reach Greece, before going on to northern and Western Europe.

Ponomarev said he was not thinking about if he would win an award for his image. "I took at least a thousand images for this story ... This photo was the beginning of a story; that's why it drew attention," he said.

The Russian photographer said he spent two months in the area where he captured the award-winning image. "In the beginning, we waited for three days for a single boat. Later, five boats approached the island in a day. We were travelling between shores to capture these moments," Ponomarev said.
RELATED TOPICS